Wireless chargers are defined by their simplicity; just set your phone down and bam, it's charging. With five charging coils to provide more usable surface area than most others, Choetech's Dual Wireless charging pad is particularly easy to use, even by Qi standards — and it's one of my favorite charging accessories in a long time. 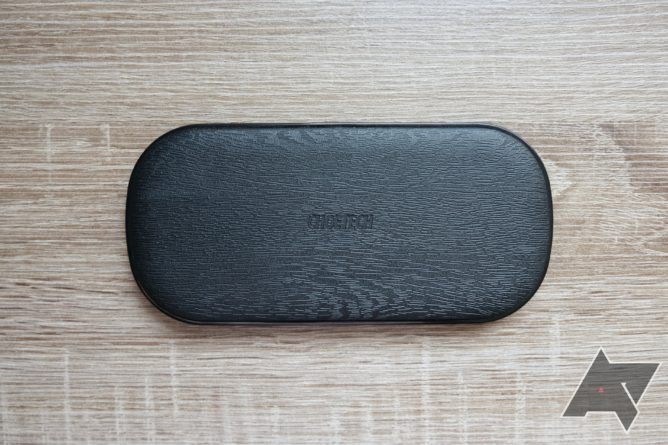 The optional wood grain pattern is certainly a look, but I'm not crazy about it.

Choetech's five-coil pad is about the size and dimensions of a large phone, with a USB-C port on the back and a green LED charging indicator on the front. Choetech says the LED is "sleep friendly," but that's debatable; it's not as bright as some I've seen in other chargers, but I'd still want it covered if I were using the pad on my bedside table.

The top side comes in either a sleek dimpled finish, or the kind of silly wood grain-inspired pattern I've got here. Either is cast in a synthetic leather that provides enough grip to keep your phone from sliding around if you interact with it while it's charging. The bottom's got four non-slip feet, plus what Choetech calls "heat dissipation holes." Those holes are ostensibly there to keep the pad cool while it charges your stuff, but there's no active ventilation, and they're only present on the bottom. I can't imagine they actually do much. Still, I never noticed the pad heating up to any significant degree, even when charging two devices. 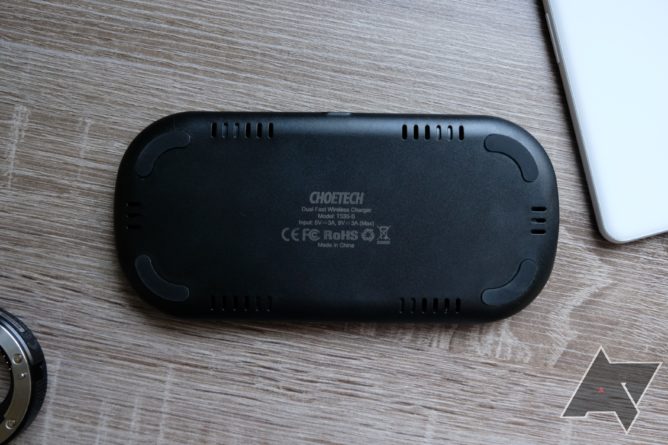 Input to the pad tops out at 18 watts, which translates to a maximum output of 10 watts to a single compatible Samsung phone, or five for most other Android devices (that's "Charging slowly" territory).

Wireless charging only works when the charging coil in your phone lines up with the one in your charging pad, which, in some combinations, can result in a frustrating hunt for the sweet spot. This pad packs five coils, one next to the other, meaning almost the entirety of its surface can charge your device — placing a single phone on it longways guarantees you'll get a charge. Charging two devices at once isn't quite as fool-proof, but even still, this pad is remarkably easy to use.

You can get the Dual Wireless charging pad in one of two SKUs. The version Choetech sells directly includes the pad itself and a nice, thick USB-A to USB-C cable. The variant available on Amazon also includes an 18-watt wall charger for $11 more, which seems like the better deal to me (unless if you've already got an abundance of wall warts).

Sure. If you've got multiple Qi-equipped devices, this is a great option. It's not the most premium or the fastest wireless charging pad you'll ever use, but it's convenient and dead simple. I've been using it at my desk for my phone and Galaxy Buds for a few weeks now, and aside from the relatively weak output, I have few complaints.

[Update: Stores are getting stock] T-Mobile may start carrying the Pixel 3, 3 XL, 3a, and 3a XL