For a few years, the Asus Chromebook Flip C302 has been one of the best Chrome OS devices around. Its MacBook-like design, great keyboard, Android app support (though that came a few months after release), good screen, and sub-$500 price point made it a great computer for many. I should know — it was my main laptop for over a year.

The C434 is a worthy successor to the C302, but it has different tradeoffs compared to the previous model — along with a higher starting price.

The most drastic change going from the C302 to the C434 is the design. The MacBook aesthetic and large screen bezels are nowhere to be seen on the C434, replaced with something that looks far more like Asus's lineup of ZenBook Windows ultrabooks. It uses a sandblasted aluminum finish, with silver edging around the hinge cover and touchpad. 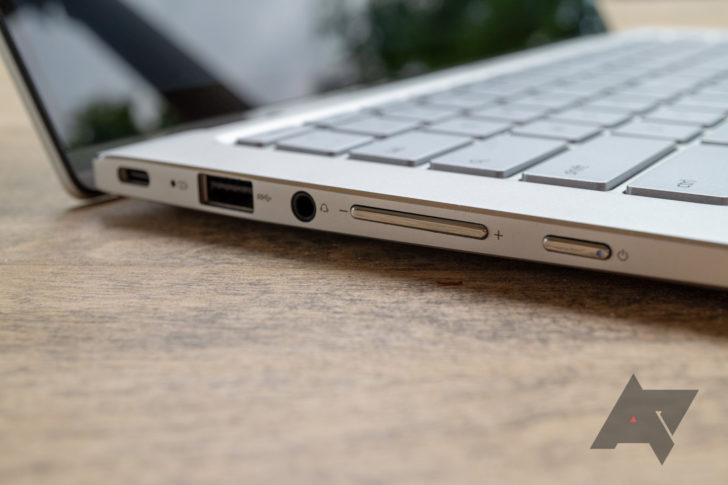 The screen is the main design improvement. While it still has a 1080p resolution (not that a 14" laptop needs anything higher), the surrounding bezels have been drastically reduced. The display looks more like a Dell XPS or MacBook Pro, and gives you more room for productivity. The webcam is still situated at the top.

Another improvement on the C434 is connectivity. There are still two USB 3.0 Type-C ports on each side, both capable of charging, but Asus has added a single Type-A connector this time around. It's going to be a while until the original USB connector goes the way of FireWire, so this is a welcome improvement in my book. There's also a headphone/microphone combo jack and a microSD card slot.

The hinge mechanism, which Asus calls 'ErgoLift,' is an interesting feature. Opening the laptop causes the keyboard to be raised at a slight 3° angle, instead of being flat. However, this means that two of the four rubber feet don't fully make contact with the desk/table, which can cause the laptop to slip around a little bit on some surfaces.

Another downside to this new design is tablet mode. While the C302 was very comfortable to use and hold as a tablet, the combination of the larger screen and the gap between the keyboard and display means this Chromebook Flip isn't very good at... flipping. 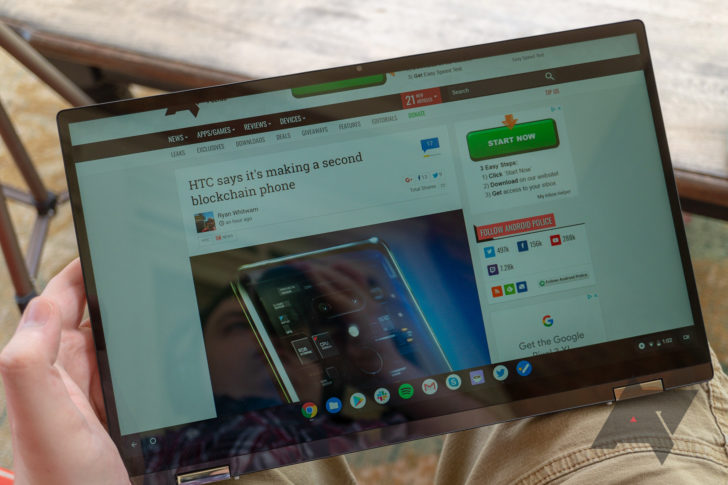 The internal hardware is where things get complicated. Just like the original C302, Asus is selling multiple variants of the C434 with different hardware. The processor can be an Intel Core m3-8100Y, i5-8200Y, or i7-8500Y, and you can have either 4GB or 8GB of RAM. There are also three options for storage: 32GB, 64GB, or 128GB (all eMMC). For reference, I'm testing the m3 model with 4GB RAM and 64GB of storage.

I did notice two hardware-related bugs on the C434. First, whatever sensor is in place that determines if the C434 is in tablet mode or laptop mode sometimes doesn't work correctly. For example, when I open the Chromebook from sleep, it occasionally takes a few seconds for the keyboard to be activated. Also, when connected to the hotspot on my OnePlus 6T, the Wi-Fi occasionally disconnects (even when the phone is right next to the laptop), and I haven't experienced that issue with any other device I own.

I'm not a massive fan of the C434's keyboard. The layout is good, with decently-sized keys and backlighting support, the keys themselves aren't very clicky — they're mushier than the keys on my Dell XPS 13. That being said, you'll probably get used to it after a few days, and at least the keys (probably) won't fall out of the computer. 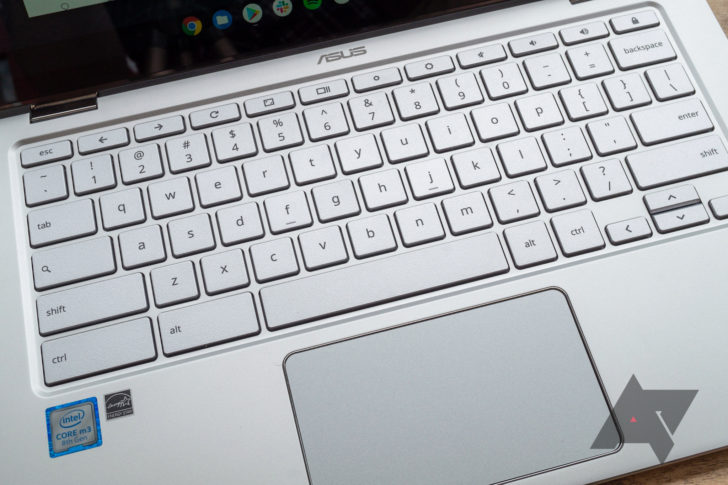 The trackpad is also a bit underwhelming. It's large enough for comfortable use and gestures, but I would have liked to see Asus copy Apple's gigantic touchpads. Clicking feels a little hollow, but again, you'll get used to it after a while.

As previously mentioned, the display is probably the most drastic change from Asus' previous Chromebooks. It's a large 14" glossy 1920x1080 IPS panel, with good viewing angles and a decent level of brightness. The small bezels also make the C434 feel more premium, and the webcam is (thankfully) still situated above the screen. 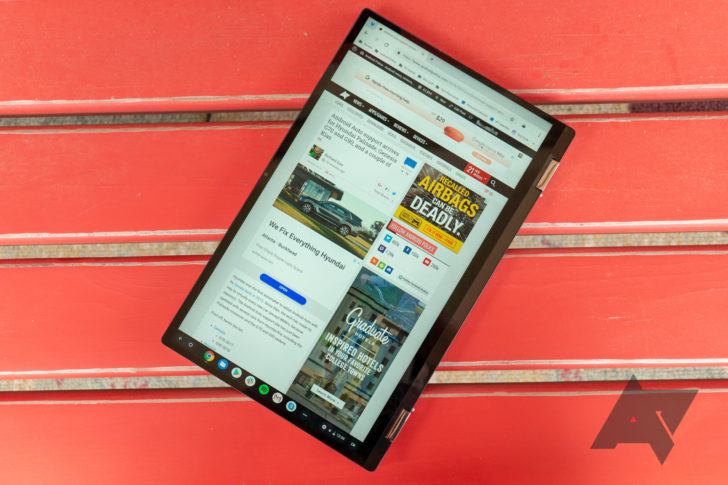 The speakers on the C434 aren't bad at all. They can get very loud — I usually kept the volume at ~20% — but there is noticeable distortion on the higher levels. The speakers are downward-firing, but I didn't really mind. 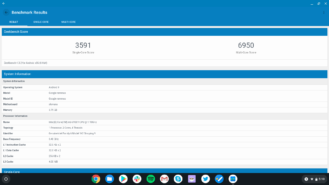 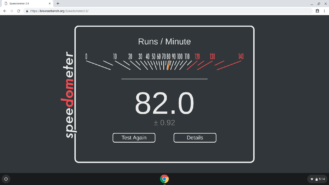 Technical talk aside, the C434 is a very fast and responsive computer. I don't push my laptops very hard, but the 4GB model handled my usual workload (usually just 5-20 Chrome tabs and a few Android apps) like a champ.

Battery life is also very good. Asus says the Chromebook should last "up to 10 hours," but in my testing, that's closer to 8 hours at 60-80% brightness. This varies quite a bit depending on what is currently running, so keep in mind that your usage could be wildly different from mine. 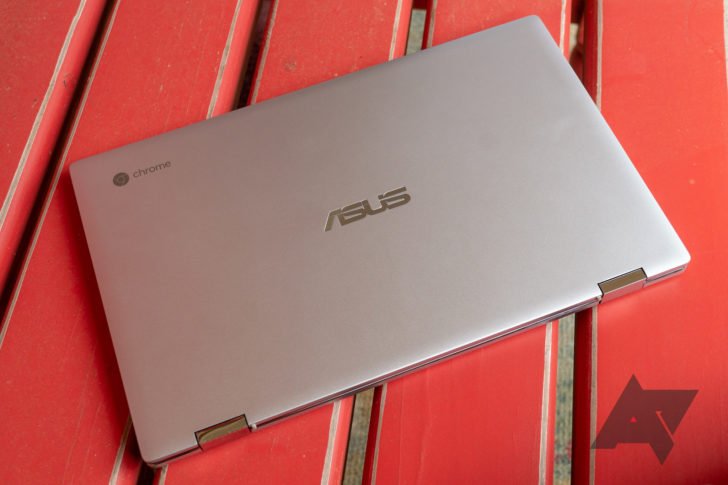 I am disappointed that Asus is still sticking to 4GB of RAM on the lowest-end model. Even though Chrome OS is generally lighter on memory usage than Windows or macOS, RAM prices have dropped to the point where there's not much of an excuse anymore to go with 4GB.

There are several variants of the C434 available worldwide, but in the United States, we have a 4GB RAM model and an 8GB model. Both have the same Core m3 processor and 64GB of storage. Availability of the 8GB version is limited at the moment (the Amazon listing is from a third-party seller who is jacking up the price), but that should hopefully improve in the coming months. If you regularly handle dozens of Chrome tabs and a few Android apps, I'd recommend waiting until the 8GB RAM version is obtainable.

Top up your Google Play balance with cash at convenience stores, starting in Mexico

15 new and notable (and 1 WTF) Android apps from the last two weeks including PHAROS AR, ...