Back in 2009, the Internet was a different place. The iPhone was just two years old, and the first Android phone, the T-Mobile G1, just saw the light of day. Most people accessed the web primarily through their desktop machines, and a significant portion of them never bothered to update their aging Internet Explorer 6 – much to the dismay of many web developers. Then, in a sudden change, usage of the browser went down as Google started to pull support for the browser. Ex-YouTuber Chris Zacharias published a post on his personal blog where he explains that this wasn't a management decision, but how he and the rest of YouTube's engineers conspired to kill Internet Explorer 6.

First, let's talk about what makes Internet Explorer 6 so universally hated and repeatedly mocked. The browser was developed during a time when Microsoft didn't have any real competition in the market, so it could break web conventions as it pleased. Making matters worse, the underlying web technologies iterated unbelievably fast between Internet Explorer 6 and more modern and more regularly updated browsers like Chrome and Firefox. Thus, many recent web developments of the time ended up breaking websites on IE6, and some classes like images always needed workarounds to function as intended.

The YouTube engineers (and many other web developers at the time) couldn't just ignore this browser, however – it had a market share of over 20 percent back then. After many sleepless nights over IE6 related hotfixes, the YouTube team had enough and developed a simple plan. They'd just add a small banner that only showed up for IE6 users, stating that the browser wouldn't be supported in the future and that users should switch to a more modern browser – see the screenshot below. The team wanted to see how people would react. Would they revolt against the change? Would they just update their browsers or ask their employer or (grand-)children to do that? 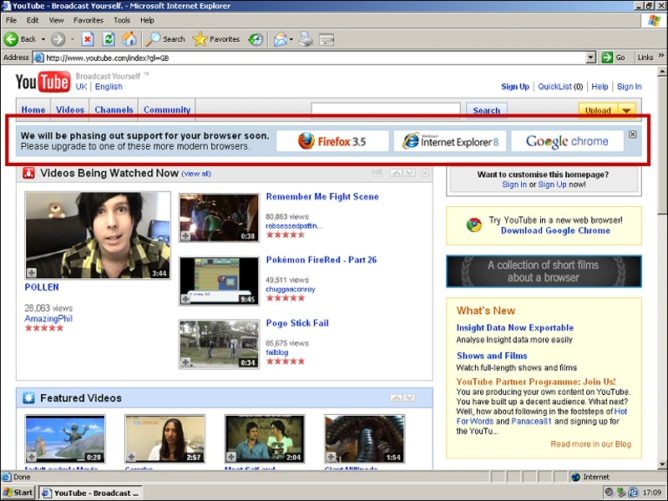 Now, usually, there are checks and balances in a company that hinder engineers from implementing any change they'd like. YouTube was in a special place though. After it was acquired by Google just three years earlier, so-called "OldTubers," developers who've been with the company from the very beginning, created a permission that allowed them to push changes without any additional checks. As long as nothing broke in the public-facing website, everyone was fine with that. The IE6 killers used this loophole to slip their code into production. Since almost no one at YouTube used the browser, they thought they wouldn't get caught right away anyway.

Sure enough, just two days after pushing out the code, the team was approached by the head of PR. He received emails from about every (tech) publication in the world, asking why YouTube threatened to kill a browser with significant market share. Luckily for our engineers, the outlets already celebrated YouTube as a savior of the web for that, since it was pushing people to safer and better browsers, all while accelerating web development. The next visit came from the company's lawyers, who wanted to make sure that the choice of browsers in the banner was randomized as to not get in trouble with anti-competitive EU-regulations around Chrome.

Other than that, the team didn't get pushback for a long while. Eventually, management noticed that they never approved that change, but by then, most of Google already implemented that banner in their products, such as Google Docs – in fact, many Googlers thought that the YouTube team simply copied Google Doc's implementation, further diffusing the connection between the scheme and its conspirers.

Sure enough, IE6's market share quickly shrunk after banners were implemented on website after website, even outside of Google. Had this story worked out any other way, the conspirers might've lost their jobs, or at least they might've been pushed to another part of the company. But since all went well, we can salute the team today and thank it for its service to the web.

We should keep in mind though that today, we might be facing browser trouble again: Chrome has a market share of over 60 percent and its engine powers many competing browsers. Google sometimes even creates exclusive websites for its browser before optimizing for others, such as Google Earth.

I can only encourage you to read the whole story as written by Chris Zacharias himself in the source link below. He has some serious Pulitzer worthy writing.