Writing about farts is stinky business, but let's all be professional here. I believe we can make it through one post about gas without dumping a ton of shitty puns... Oops, at least I tried. So we're here to discuss a new Android app, Fartr, which is the fart app to record, analyze, and (uhm) share your farts. You may think we're joking, but this is very serious.

The idea is so simple I'm surprised no one came up with it before. Sure, there are tons of fart sounds apps on the Play Store, but an app to scientifically analyze (no pun intended) your thunderous creations? Nope, we didn't get wind of any until now. Fartr records the sounds from your phone's microphone, which may indeed involve you holding it next to your derrière — the FAQ does suggest a quiet space to avoid nearby noises and awkward glances. It will then interpret your asscoustics based on four properties — pitch, duration, volume, meter — and give them a Fartr Score. Unfortunately, no stench detection is available, so this is more about the bomb than the stink.

Testing the app at work was a fun thing. Since I was in no disposition to try first-party creations, I had to resort to third-party ones and the internet didn't disappoint. Did you know that YouTube is filled with videos of minutes to ten hours of hilarious cutting the cheese sounds? I just learned that today. And to be fair, I have the kind of job (pharmacist) where I could get away with such shenanigans... "Oh, nothing, just watching a video about a medical condition that causes flatulence." Still, I nearly fell off my desk when a patient came by while the sound was blasting. Good thing videos can be paused voluntarily, unlike the real thing.

So back to the testing, you can use the app with an account or without. Agree to the permissions, record the sound (10 seconds max — I pity the room if your masterpiece lasts longer), and wait for the graphical analysis and score. Fartr seems pretty accurate at detecting what's a fart and what's not, and the given scores for different sounds made sense in light of each other. 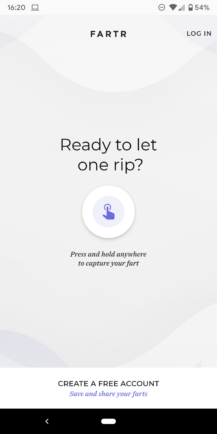 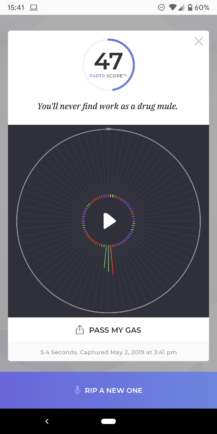 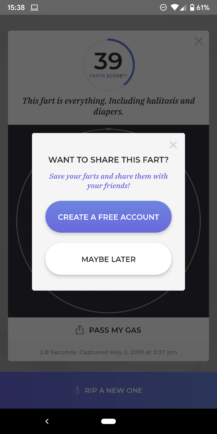 You'll also find funny quips along with the score, such as "We're sending your toilet a get-well card." Additionally, there's a replay button to listen back to your marvelous wind machine noise. And if you'd like to toot your own horn, you can share the fart sound and score with others. However, that last bit requires an account, just like saving it to your personal archive does. 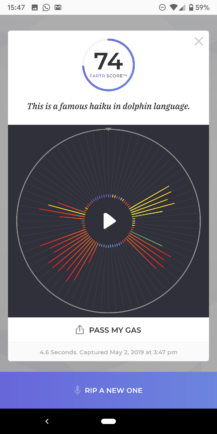 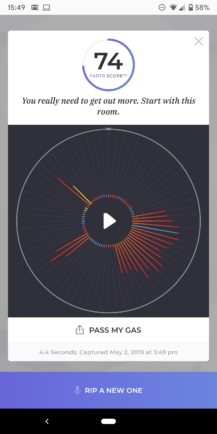 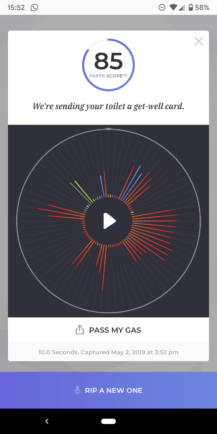 For a joke app, Fartr is pretty well made, and the developers don't seem to take themselves seriously while still providing something believably "scientific" (or at least algorithmic). The Play Store description, FAQs, and text inside the app all reek of so-bad-but-so-good scents of humor, and there's even a mention of future updates that would bring leaderboards and competitions. That's what I'd call achieving fame by the back door.

The only stinker is that Fartr costs real money. You'll have to shell out $2 to analyze your smelly vapors, but at least the devs acknowledge that flatulence isn't fun for everyone and they'll be giving out part of the app's proceeds to the Crohn's and Colitis Foundation. That's fartastic. 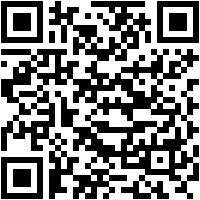 Alternate title: If Fartbook was real, it would be Fartr

NEW YORK, May 2, 2019 /PRNewswire/ -- Fartr™, the world's first app for analyzing, visualizing, scoring and sharing flatulence, was released today for iOS and Android. Breaking from a traditionally crude pack of apps via its high-end design, Fartr features a patent-pending algorithm for visualizing and scoring flatulence. Each recording creates a stunning color visualization accompanied by a full assessment of the captured audio's characteristics: Users receive a unique Fartr Score™ – from 0 to 100 – as well as an interpretive text description.

"Fartr allows people to finally see their flatulence in full color and share those one-of-kind visualizations with their friends through social media or text messages," said the company. "At Fartr, we believe flatulence can be beautiful and unique, and we have built an app to capture that."

Fartr works by first providing users a highly accurate method for capturing their flatulence. Simply launch the app and hold anywhere on the screen to initiate recording. Next, the app interprets the captured audio and, using a proprietary algorithm, assesses four key attributes: volume, length, pitch and rhythm.

The results are then presented to the user:

– A succinct text description of the flatulence keyed-off its attributes

Results can be easily shared with friends via text, email, and social networks via the mobile device's standard share panel.

While Fartr is being released as an entertainment app, the company understands that flatulence can be painful for some, and is donating a percentage of proceeds to causes supporting Crohn's and Colitis research.

The app is available for download today for $1.99 and provides access to all features in an ad-free experience.