With everyone moving away from cable subscriptions to various streaming services, it's becoming more judicious to have some form of Smart TV in the house. Either you get a set that has the functionality built in or you buy a separate top-box, but in both cases, you can't go wrong with Roku's ecosystem as it's the most widely-supported by all streaming providers (Netflix, HBO, Hulu, Amazon, YouTube, Google Play, etc...). And today, we have a few deals that will make your purchase a little sweeter.

Best Buy is offering several discounts on Sharp's Roku built-in lineup. The four most interesting deals are on the larger 4K TVs, with the best bang for your buck being the 55" model. At just $300, this is the lowest price we've seen on this model. The 58" is $100 more, and the smaller 50" and 43" are the same $300. So you're better off grabbing the 55" size unless you really want something a little larger, or you don't have enough space and need something smaller. 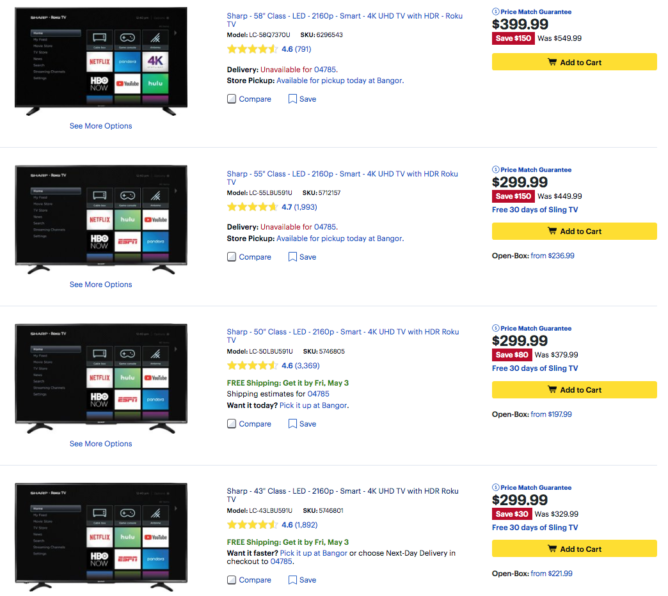 All four models are LED TVs with a 2160p resolution, HDR, three HDMI inputs, and one USB port. They're also compatible with Google Assistant and Amazon Alexa, so you can ask your phone or smart speaker to play a certain movie or TV show.

If you're interested in the deals, feel free to check them out below. I also included a 24" 720p Sharp TV with Roku, because it's a killer deal at just $99 and could be a great set for smaller spaces.