Some of the information regarding the Pixel 3a Lee was able to determine via information printed on the box, other details appear to come from an undisclosed source — probably the same as the photos themselves. Most of it corroborates what has already been leaked.

According to Lee, the Pixel 3a will have two storage options: 64GB and 128GB. Screen size comes in at 5.6" in 1080p-equivalent resolution, with a plastic build, headphone jack, and down-facing speakers. The new "Purple-ish" color is apparently so subtle it nearly matches the box's white background. Lee was also told by his source that the launch date for the Pixel 3a is set for May 7th, during Google's I/O developer conference, as previously expected. 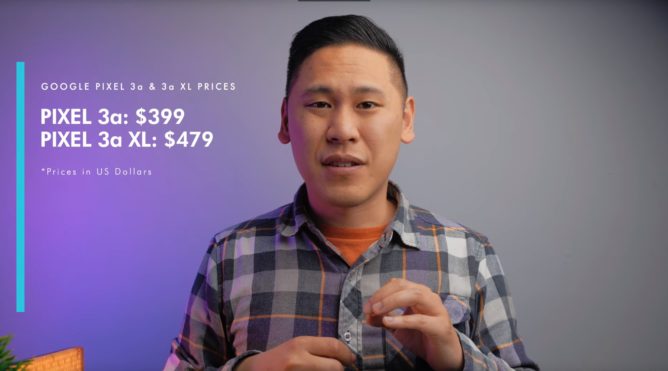 Lastly, Lee's states that the Pixel 3a will start at $399, while the bigger 3a XL will start at $479. That's substantially cheaper than the $500+ estimates for the 3a based off of a simple conversion of leaked European retailer pricing, and on paper it sounds like a pretty good deal.

He also expects to have more details about the phone over the next week, so keep an eye out for more videos and tweets from Lee if you're interested in the Pixel 3a.

A few extra specs were also leaked on Twitter earlier today for both the 3a and 3a XL.

Most of the specifications were already repeatedly rumored or corroborated by the box, but there are a few new details, like individual battery capacities and weight. For your convenience, we've tossed together a pair of spec tables just below based on the new info.

Fair warning, this is still all based on cumulative previous leaks, and some specifics like SoC and camera are more indeterminate. Even if details have been multiply corroborated, don't expect perfect accuracy.

You're holding it wrong — Touching the corner of the Galaxy Tab S5e reportedly kills WiFi ...