Android Automotive as a platform has, technically, existed for years. The problem is that, compared to a smartphone, it takes a long time to design and build a car, so Google's had to wait those years to give the system a proper introduction. After spending some time seeing it demonstrated in the upcoming Polestar 2 (an all-electric vehicle), I think the wait was worth it: this looks legit.

For ages, we've all said the same thing: "All I want is Google Maps on my car's infotainment screen." Android Auto delivered on some of that promise, but the projected app is subject to performance glitches, wonky voice functionality, and can feel like a square peg in a round hole solution for vehicles that clearly weren't designed with touch-first interfaces in mind. It's also often paired with comically small screens, which makes it feel less like the future is now, and more like the future has provided us a legacy support patch. Don't get me wrong, Auto is super useful when it works right, but it's rare that it feels like a native experience because of the inherent reliance on your smartphone. With Automotive, that all changes. 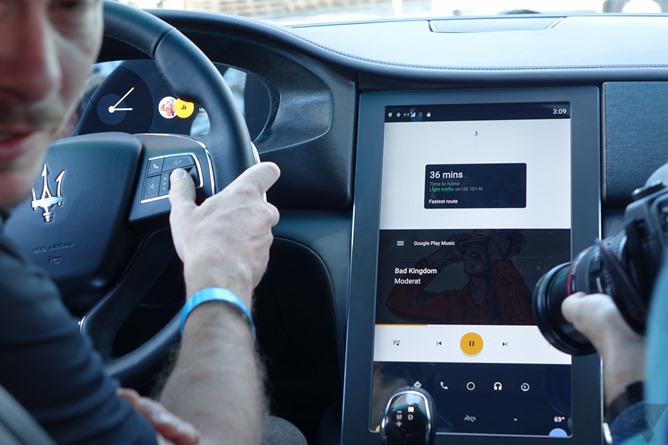 Pictured above, Google debuted the first Android Automotive concept at I/O 2016 - it looks a lot different.

The Polestar 2 is probably Google's ideal canvas on which to debut Automotive (and it will be the first Android Automotive car on the road), because Polestar is heavily invested in a minimalist, extremely tech-forward brand image. The spartan, Scandinavian interior is dominated by a huge 11" vertically-mounted touchscreen in the center of the dash, which is largely free of physical buttons. That tablet display controls vehicle settings, climate, media, and navigation - and it's also fully responsive to your voice, via the built-in Google Assistant. Simply talk to it like you would your Android smartphone, and the Polestar 2's Android Automotive system will respond and carry out your commands. 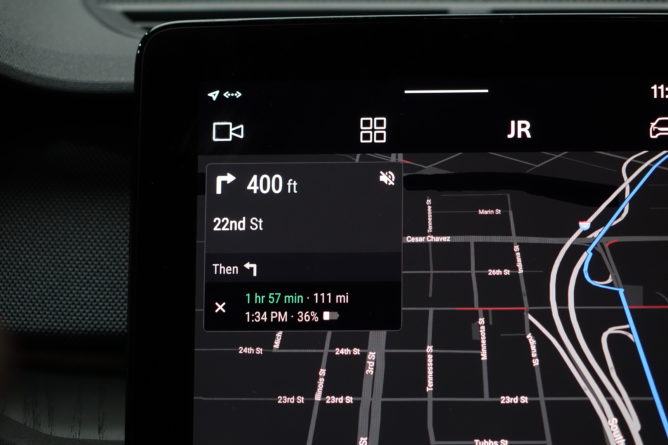 Google Maps on the Polestar 2 will offer estimated charge usage when navigating to a destination.

Google has designed a specially-built version of Maps for Automotive, with an interface that focuses on prioritizing visibility of the map, making touch targets easy to hit, and including useful supplementary information like - in the case of the Polestar 2 - how much remaining charge your vehicle will have when you reach your destination. This was the only example we saw today of Automotive integrating live vehicle data inside of a Google app, but according to Google, it won't be the last. Searching for ways to make driving a little easier - like, perhaps displaying charging stations that work with your car's plug type and their availability - has been a key focus in developing the platform, and with a product as expansive and capable as Maps, I'd wager the possibilities are near endless. The Assistant will be able to perform vehicle commands like adjusting the stereo, climate control, and possibly more functions in the future (this is the very first version, after all).

As for the whole "connection to the internet" part, Google's thought about that as well: Automotive is designed to work without an internet connection or even without an associated Google account (obviously, you lose out on personalized features when you don't do that). Things like navigation will need periodic (think monthly) updates from the cloud to keep maps up to date - so you couldn't navigate indefinitely without connectivity - but Google promises that most core functions like voice commands will work fine even if you don't have a signal. Polestar, for its part, says all updates and connectivity to built-in Google services like Maps, messaging, the Play Store, and Assistant (when internet is required for results) are fully baked into the MSRP for the life of the car. If you want the car to be able to use its mobile LTE connection to stream music or other data-heavy content, though, a post-paid data plan will be on offer when it launches (no pricing available). Mercifully, Polestar says you'll be able to use your phone as a hotspot the car can connect to for such data, so in theory there should be no actual need for the paid plan. 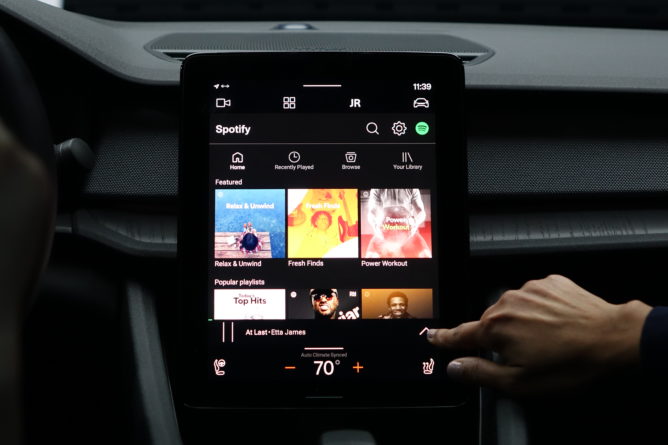 Spotify is working with Google to develop a car interface, shown above, for Automotive.

Automotive is also designed from the ground up to work with multiple displays and be highly customizable, allowing manufacturers to both brand and design the look and feel of the interface. While some may moan that this will lead to fragmentation, Google says one of its core concerns with Automotive is in providing consistent and reliable updates to partners. As cars become more and more digital, anxiety about security is growing - and Google has made a mantra of its monthly Android security patches. As to whether fears about fragmentation will play out in reality, I have to say I didn't feel very reassured - Google is already saying that Fiat-Chrysler Group is an Android Automotive adopter, but that it won't be offering Google's services on its cars, just the basic, underlying platform. That's concerning, and I have to wonder whether Google services adopters will be the exception rather than the rule when it comes to Automotive in general.

Polestar, for its part, was open about why it chose Google's product: Volvo (Polestar's parent company) wasn't able to execute on maps, voice control, or other key infotainment advancements in a way it was happy with. It's positively refreshing to hear this from an automotive manufacturer, because so many of them simply refuse to acknowledge that big tech companies are years ahead of them on these kinds of things, preferring instead to offer customers the illusion of cutting-edge tech that's actually three or four years old - and probably wasn't very good to begin with (the Jaguar I-Pace and its notoriously bad touchscreen or Cadillac's hated CUE system come to mind). Polestar chose to go all-in on Android Automotive, and while some people may not like virtual climate control and full-touch navigation, there's no denying that Tesla has made it the bar competitors must now aspire to. The Polestar 2 isn't quite as extreme, I'd argue, as it does have robust steering wheel controls and a few buttons down by the gear selector - but it's pretty damn close.

Watching the demo, Automotive seemed extremely quick and responsive - the chips powering it in the Polestar 2 must be pretty capable, because Spotify looked perfectly smooth running through the UI. Given even Tesla's cars had been harangued for their performance until the Model 3 debuted, it's nice to see what seems like a carmaker taking input response and software navigation speed seriously. It does start to matter a lot more when the screen is being used to control more and more critical vehicle functions, and I don't know about you, but I'd happily tack $500 onto the sticker price of a car to step up to a premium-tier chipset, especially when that chipset now controls my air vents.

The Polestar 2 - and Android Automotive along with it - will make their American debut early next year. The launch edition of the car will retail for around $63,000 (minus a $7,500 federal tax credit), with later versions starting nearer $55,000 (no tax credit). It'll have an estimated range of 275 miles, and supports rapid charging at up to 150kW. 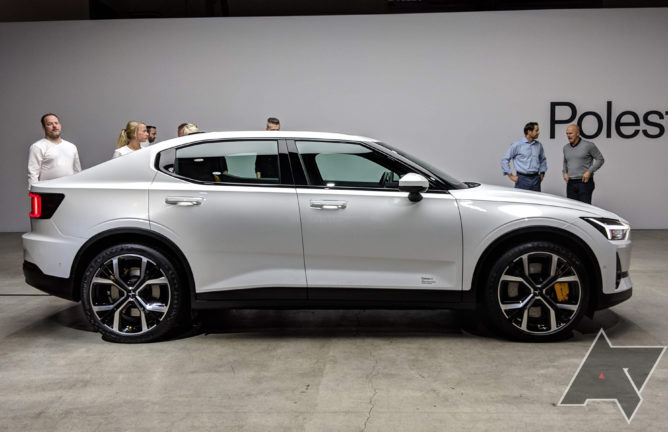