Recent design trends on Android take away app bars' individual colors and replace them with white, making it harder for us to distinguish apps. After Facebook already followed that fad with its Messenger redesign (which thankfully includes a dark theme), the company announced at its annual developer conference F8 that its main app and website will become whiter, too. Along with these visual changes, groups will receive a more prominent place on the platform.

In the Android app, the most obvious change is the all-white app bar at the top, accompanied by a new huge Facebook branding that takes up the left third of the screen. The search bar that used to be front and center shrinks to an icon and sits on the right side next to the quick link to Messenger. On the left side, the camera button is gone. Other than that, the icons in the tab bar below are a little flatter now, with the active one being blue. The rest of the app stays mostly the same, apart from the "Add a post" button, which doesn't have a pastel blue background anymore. 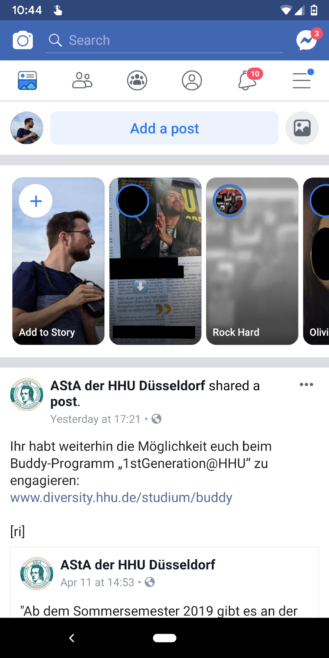 The more interesting changes revolve around groups. Facebook redesigned the section to make it easier to discover new communities and added links to relevant groups in other parts of the app, such as Marketplace. News Feed content can now also be shared directly with a group, just as you could always share posts with individual contacts. There are also some features directed towards specific groups, such as anonymous posts in health communities, position opening templates for job exchanges, and a new chat feature for gaming groups. If your Facebook interface doesn't show you a Groups tab, you can always access the section by heading to the rightmost tab with three lines.

Meanwhile, on desktop, the company plans a complete overhaul of its platform that brings the design closer to that of the apps. The middle panel of the UI looks just like the mobile News Feed, with additional sidebars on the left and right with quick links to groups, events, contacts, and more. The new website is built with React and Relay, Facebook's open-source JavaScript framework.

Here’s a sneak peek at the upcoming redesign of https://t.co/IB0F8Tlx12, fully powered by React and Relay. Expect to hear more about how we’re building it soon. https://t.co/5xgNPnB8ok pic.twitter.com/99vPKP5Vnw

The new app design has been showing up for some users since late March, but it was a limited A/B test. It should now begin rolling out to everyone. Meanwhile, the redesigned website is supposed to come "in the next few months," according to Facebook.