Premium Chromebooks are a niche product category; most Chromebooks in any price range can do pretty much all the same things. The difference comes in how well a particular device handles those tasks — and while HP's Chromebook x360 14 G1 is unlikely to convert anyone already against high-end Chrome OS devices on principle, it's an extremely competent laptop that's worth a look for anybody interested in a quality Chrome machine.

The G1 is built explicitly for business, and its design reflects that: it's handsome, but not especially striking (one person I showed it to said "yep, that's a computer alright"). Seeing as how it's meant for office use, it's not unreasonable that HP would want to keep the design low-key, but I would've appreciated just a bit more panache. The thing certainly feels premium, though; it's encased primarily in aluminum (its underside is plastic), and at just over three and a half pounds, it's got a pleasing heft to it without feeling bulky. 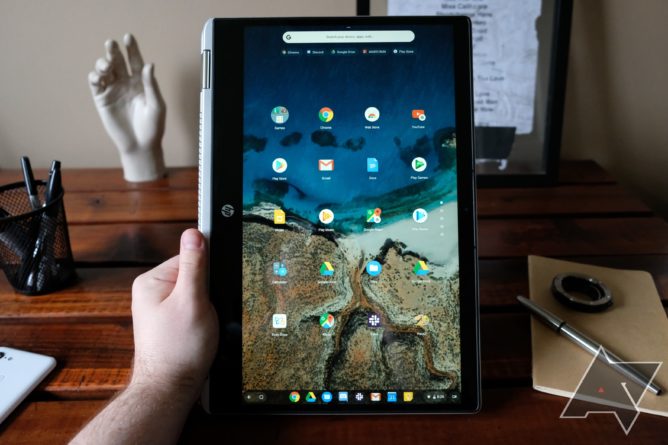 This is not the most elegant tablet you'll ever use.

It's a convertible style, so it can be used like a regular ol' laptop, or with the screen folded backwards to act as a facsimile of a tablet. The rationale for this functionality in a work laptop is that it can be propped up in a tent configuration to give impromptu presentations, or folded into a tablet to review and sign documents. But the device's shape creates an awkward gap at the side opposite the hinge in this configuration, and while it's not thick for a laptop by any means, it makes for a pretty unwieldy tablet. Personally, I think I would've preferred this be a normal laptop with a touchscreen rather than a convertible, but the versatility doesn't detract much from the overall package. 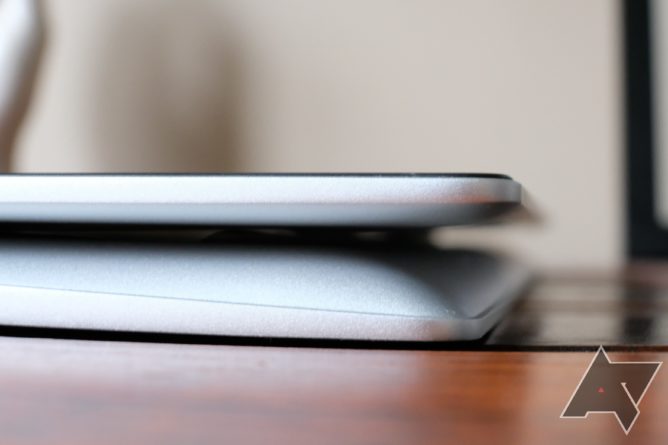 There's an uncomfortable gap opposite the hinge in tablet mode.

On the right edge live a USB-C port, a full-size USB port, a slot for a laptop lock, and volume rocker. On the opposite side you'll find another USB-C port, a 3.5 millimeter auxiliary jack, a microSD card slot, and the power button. That microSD slot is a merciful inclusion, as all models of the G1 come with just 64 gigabytes of internal storage. Either USB-C port can be used for power or data, plus video and audio output for accessories like docks and USB-C headphones. The power button is stiff, though, and provides very little feedback. It's hard to know when you've pressed it unless you're looking at the screen. 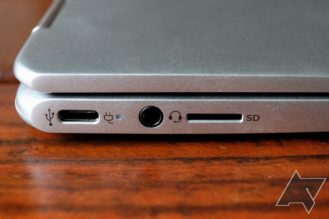 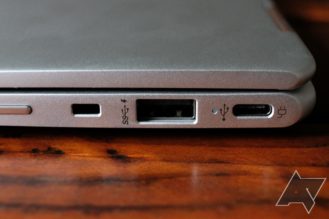 HP says the G1 meets MIL-STD 810G standards for durability, which means it's more likely than your average laptop to survive drops, dust, and humidity. Unlike IP ratings, there's no official certification process for compliance here, and the likelihood of your work computer getting dropped in the sand seems low. Still, any assurance that expensive electronics aren't delicate is comforting.

The backlit keyboard on the G1 might be the best one I've ever used in a Chromebook, if not any laptop. The keys are clicky and responsive, and offer just enough resistance before giving way to pretty luxurious travel. People often sing the praises of the Pixelbook's keyboard, but to me, this one is worlds better; I have no reservations about writing on it for hours at a time. I would have liked to see a dedicated Google Assistant key, but with Assistant functionality coming to the app drawer search bar, its absence is an extremely minor complaint. 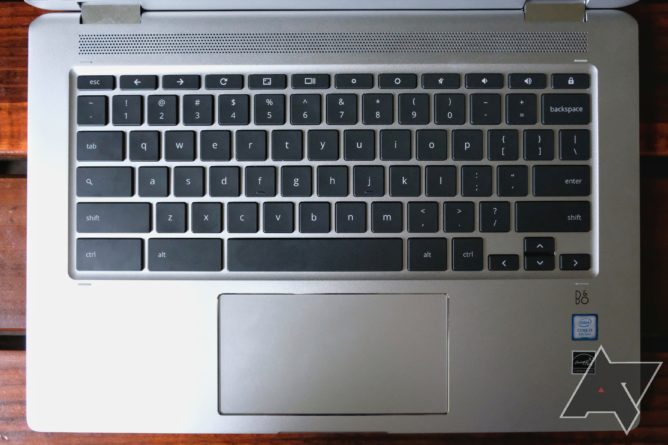 All glory to HP keyboards.

Likewise, I've got few complaints about the trackpad. It's big enough and plenty accurate, and never failed to register my taps or gestures. Its texture provides a comfortable amount of resistance against a sliding finger. It's plastic, though, which is a little bit of a bummer. At this price point, glass would have been nice. 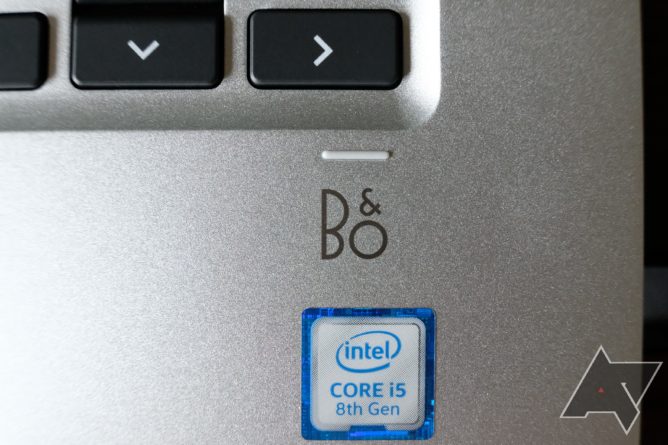 HP is proud of its partnership with Bang & Olufsen.

HP makes a to-do about the Bang & Olufsen-branded speakers in the G1, and to their credit, they do sound better than speakers in most laptops, producing loud, clear sound without much distortion. Bass tones come across a bit hollow, though, like the sound is reverberating through the device's chassis before spilling out. 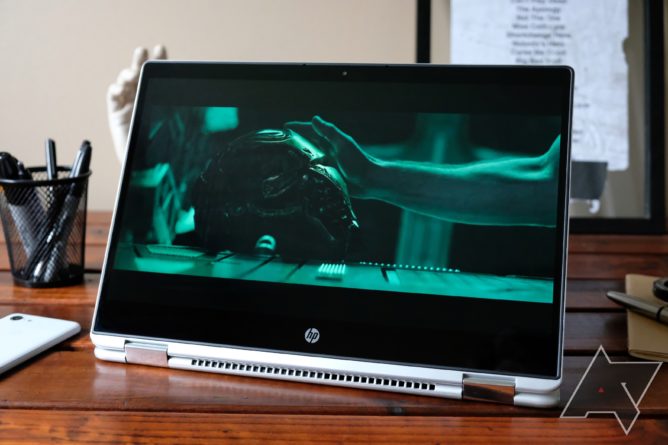 The display doesn't get nearly as bright as I'd like.

The display, on the other hand, is far and away the G1's biggest weakness; it's unimpressive at best and maybe a little bad at worst. It doesn't get very bright — even indoors, I often find myself maxing out the brightness slider, and you can more or less forget about using it outside on a sunny day. Colors don't pop the way I'd like them to, either, and my review unit looks a touch warm (I actually checked to see if Chrome OS's Night Light feature was on by default when I set it up — it wasn't). What's more, the display isn't compatible with active styluses like the Pixelbook Pen. The underwhelming screen seems to be at odds with the Chromebook's purported above-average durability — you're not likely to encounter much dust or moisture if you never use the thing outside.

Fortunately, you couldn't ask for much better performance out of a Chromebook than you're getting here. Over a couple weeks of using the device daily, I didn't encounter a single hiccup. It's perceptibly more responsive than my Pixelbook, which, although similarly equipped, has a previous-generation Intel processor.

The eighth-gen Core i5 in my review model is more than capable of handling any number of tasks you might want to accomplish on a Chromebook, and eight gigabytes of RAM is plenty; in seeing how many tabs it took to bog it down, my attention span faltered before the Chromebook's did. If you're really worried about future-proofing, you can step things up to a Core i7 processor and 16 gigs of RAM — but I think even the entry-level Core i3 variant would have more than enough power to be viable for several years.

Battery life is similarly impressive. I was never able to kill the G1 in a single day (it's possible, but I pity anyone doing the kind of work it would require). I consistently squeezed about 12 hours of life out of the machine between charges, which, for me, is more than enough.

Maybe. At this point, you already know whether a Chromebook is right for your needs. If you're big into PC gaming or video editing, then obviously, this isn't the machine for you. If, like me, you're able to do your job on Chrome OS, though, it's a compelling package.

Despite my quibbles with its screen, I haven't minded using the HP Chromebook x360 14 G1 as my sole computer one bit. Performance is fantastic, battery life is stellar, and the keyboard will make you hate typing on other Chromebooks. If you're looking for a big, premium Chrome OS device to use primarily indoors, this will tick a lot of your boxes. 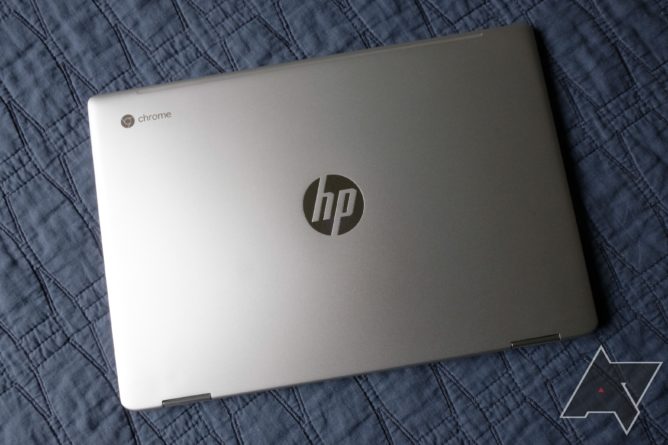 It's downright expensive, though, with an MSRP starting just over $1,000, and climbing to more than $1,400 for the i5 model I tested. Even to me, a premium Chromebook evangelist, that's too much — especially given how frequently and substantially discounted the Pixelbook has been lately.

You can currently order a G1 direct from HP for as low as $626.43 for the base model, or $796.29 for the beefier version I've been using. Those prices are much fairer, but HP predicts they won't ship until late May. If you're willing to wait, you likely won't be disappointed, but I can't recommend diving in at full price. If the i3 model tickles your fancy, consider the regular x360 14; save for the color and MIL-STD 810G durability, it's extremely similar and significantly less expensive.

Google Maps can suggest the most bustling, interesting, or popular neighborhoods around you