YouTube Music has been groomed as a replacement for Play Music ever since Google rebranded its YouTube services last year, though we haven't seen much movement in that regard. About a month ago, YouTube Music gained the ability to act as a media player for local files, though only through other apps like file managers. Now, in-app local playback is being rolled out, paving the way for Play Music's deprecation. 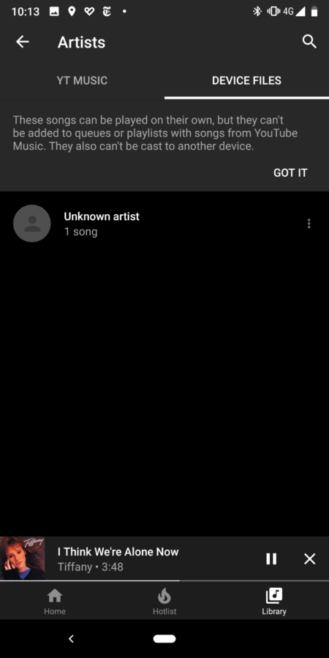 Google chose to slot the functionality in a new "Device Files" tab. However, per the banner in the screenshot above, your local audio files can't be added to queues and playlists with songs from YouTube Music. Play Music has no such limitations, so we're not sure why they're here. The banner also notes that local files can't be cast to other devices.

The solitary screenshot we have shows Device Files under the Artists section of the Library tab. Presumably, there will be a similar tab in the other four sections (Downloads, Playlists, Albums, and Liked songs), but we can't be 100% sure without more screenshots.

Given that this isn't showing up on our phones, even with the latest v3.13.52 APK, this is almost certainly a server-side rollout. But even though it's barely out yet, this is an important progression towards YouTube Music becoming Play Music's replacement.