The Red Magic Mars from Nubia was only unveiled at CES in January this year, but the Chinese OEM has already taken the wraps off its successor. The Mars didn't fare so well in our review last month, but that's old news now. The Red Magic 3 is here with an improved spec sheet and looks that scream "I'm a gaming phone" even more so than before.

Competitive flagship specs for a low $399 price made the Mars an appealing prospect and the Red Magic 3 ups the ante in a few key areas. The processor is now a Qualcomm Snapdragon 855 with Adreno 640, you can get up to 12GB of RAM, and there's active liquid cooling with an internal turbo fan — an apparent industry first. 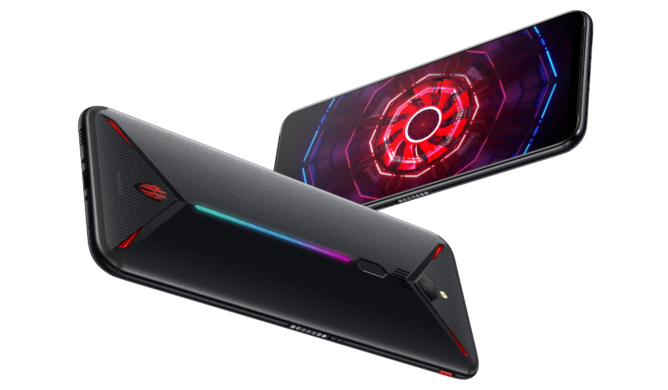 The battery capacity has also been upped to a whopping 5,000mAh with 27W fast charging, while the FHD+ HDR AMOLED display measures 6.65 inches and boasts a 90Hz refresh rate. Stereo front-facing speakers and DTS:X technology are also on board. On the rear there's a single 48MP camera sensor with a crazy 1920fps super slow motion feature listed in the specs along with 8K video recording. The additional capacitive shoulder buttons are back again, which was one of the things Ryan did enjoy when he reviewed the last Red Magic phone, and so is the disappointing lightbar. Other new features said to aid gaming include a special dashboard with pro-user settings and more advanced haptics. The Red Magic 3 will go on sale May 3rd in China, starting at 2899 Yuan (around $430). It will be available later on in the USA, Canada, UK, and various European countries. If you want to be one of the first to get your hands on it, you can sign up for the Unboxing Lab on the Red Magic site.

There’s a lot to say about the Red Magic 3, with powerhouse specs, innovative tech, and unique gaming features. Here’s the quick version:

There’s a lot more excitement packed inside the Red Magic 3, though, like an all-new gaming dashboard with pro-user settings, advanced haptic feedback, RGB lighting, and more. Please download the full press release for a more in-depth look at the Red Magic 3:

We’re gearing up for the Red Magic 3 launch in the USA, Canada, EU, and the UK with the introduction of the Red Magic Unboxing Lab.

Starting tomorrow, users can sign up to apply for early access to be the first to unbox the Red Magic 3. Second and third place winners will receive coupon codes for Red Magic 3 discounts. For full details, please visit the http://redmagic.gg on April 29th.

We encourage users to sign up quickly to allow for extra time in the community vote.