Smartphone marketing can be hard, just ask Huawei or OnePlus circa 2014. Today it's Xiaomi that is pushing cringe onto potential customers, tweeting out a video so bad that the company deleted it. Just in case you missed it, here it is:

The video shows a couple in bed, as the man not-quite-comically fumbles his phone, surreptitiously responding to late-night, flirty messages from another woman via Facebook Messenger. He is subsequently caught.

The text accompanying the original tweet implied that he'd have gotten away with his attempts at cheating if he'd been using a Mi 9 SE, for some reason. 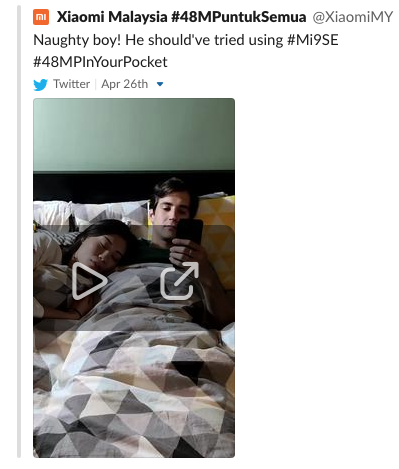 A screenshot of the original tweet in all its glory.

Admittedly, it was Xiaomi's "Mi Malaysia" account that made the tweet (which has since been deleted), but both the content and the ridiculously low production quality aren't doing the company any favors. Maybe next time it should just stick to embarrassing Twitter polls.