Android Headlines has obtained an image of the two devices, both in cases and seemingly not scaled properly relative to each other. They both have the same wallpaper behind the current incarnation of the Pixel launcher and the time is set to 9:00 — indicating that they will launch with Android 9 Pie, which makes sense since Q won't arrive until fall — and the date set to May 7, the launch date. 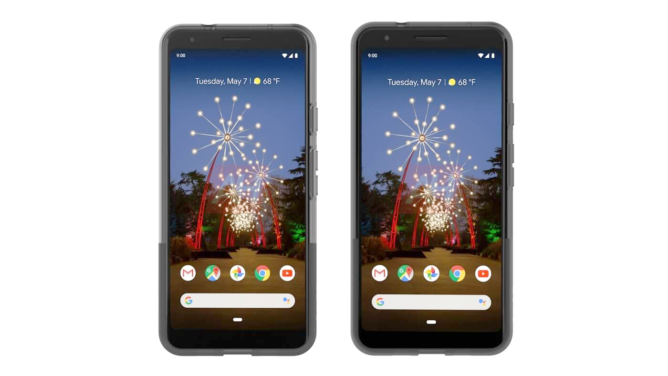 The same image brightened slightly so we can better see the details.

There's no new information to be gleaned here really, only confirmation of details we already knew. The devices have sizable bezels, a headphone jack on top, USB-C port on the bottom, and buttons on the right side, power over volume up and down (which appear to be separate buttons rather than a rocker, but that's likely just a feature of the case). Unlike the regular Pixel 3 and 3 XL, there's only one front camera and no dual front-facing speakers. What we see here is likely just an earpiece, with the loudspeakers expected to be on the bottom either side of the charging port (possibly even just a single mono one).

We're expecting both phones to ship with an upper mid-range Qualcomm processor (perhaps the SD670 or SD710) and 4GB of RAM. The 3a is rumored to have a 5.6-inch screen while the XL model is likely to have a display nearer 6 inches diagonally. Their success will certainly depend on the pricing, which we'll be eager to learn on May 7.

No major phone launch is allowed to go ahead before Evan Blass (@evleaks) has leaked it, so Google will be relieved to see that he's shared a new render of the Pixel 3a. It's much like the one we've already seen — it's got the same wallpaper and screen setup — but without the case and the back of the device is also shown off here. As expected, there's a single rear camera with a flash and a fingerprint scanner in the usual position.

With the presumptive Pixel 3a launch just a little over a week away, we're in the home stretch now when it comes to leaks — and that means running into some nice, high-quality images.

The latest is another official-looking render published by Evan Blass, showing off the Pixel 3a in what's described as its "purple" color option.

Rumors had already pointed to the existence of a purple or "iris" Pixel 3a, but if we're being honest we were expecting something a little more ... well, purpley. While Photoshop confirms a mix of cyan and magenta here, it's just so unbelievable pastel as to barely register as purple. At least we get a cute little yellow power button. Fans of bold colors, keep looking for your next phone elsewhere.