In the first Android Q Beta, a few cosmetic changes were made to the Settings app, but nothing of great consequence. Now that Beta 2 is upon us, some more meaningful changes have been included, with suggestions at the top of the Settings screen encouraging you to connect to a Wifi network and a card with information about connected Bluetooth devices.

These new UI features appear in the same place as the little pointers that let you know if your device is currently set to vibrate or that Airplane Mode is switched on — this is very much just an extension to this helpful section. If you have your WiFi turned off for a while, a toggle may show up here as a reminder. Activate it and a list of the top three networks in your current location will be served to you.

A similar section also appears for Bluetooth, although only when you're already connected to a device. A heading tells you how many devices you're connected to with a list below that shows battery level and a cog icon to take you through to the settings page for each one. Unlike with WiFi, no toggle shows up that suggests you turn Bluetooth on and connect to something. 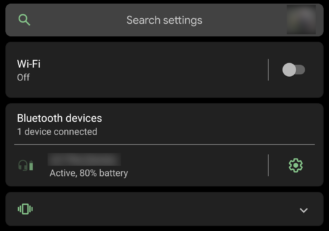 As you can see from the screenshot below, suggestions are expanding to other settings too. In this example, a suggestion has appeared for managing notification channels for an app called Lenskart. According to our tipster, Samarth, he's never altered the channels for that app before, but he did get the usual note asking him if he wanted to keep seeing notifications for the app after dismissing them a few times — so maybe this triggered the suggestion in the settings.

We've not been able to replicate this functionality ourselves, so if anyone else has, do let us know in the comments.