As soon as the first Samsung Galaxy Fold units saw the hands of reviewers, the displays started failing left and right. While it was possible to brush off some journalists' issues to incorrect handling because they peeled off the non-removable screen protector, other people used the device as intended and still had their screens going to Nirvana. The team of iFixit investigated and found some structural problems inherent to the phone's design that might end up being very hard to fix for Samsung.

First off, iFixit reminds us that OLED screens are imminently more prone to breaking than their LCD counterparts, despite their advantages in material flexibility, brightness, contrast, and energy efficiency. That's why OLEDs need to be hermetically sealed off from the outside environment since even a little dust particle can end up breaking them when it touches them directly.

Now, the Galaxy Fold pushes the limits of current technology. Samsung uses OLEDs for their flexibility so that the unfolded inner screen isn't broken by a seam or black bar that would show up if one would put two rigid LCDs there. This design comes with problems, however: Right inside the fold, there isn't any protection from dirt or small debris at all, so particles can enter the back of the screen easily. It's likely that such a shred entered The Verge's test phone, as a little bump appeared on the screen's seam shortly before it completely broke. 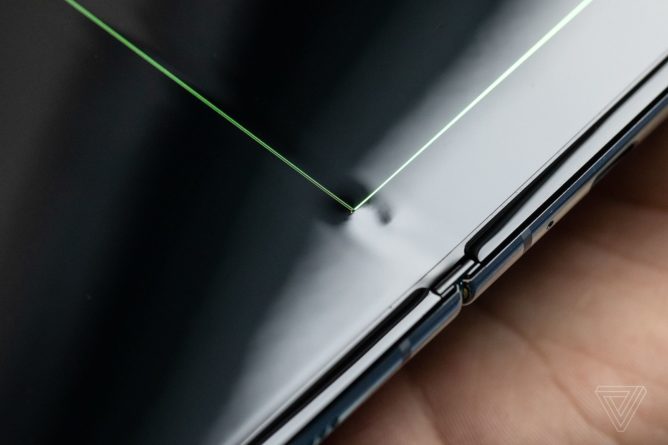 Another problem that hasn't arisen yet, but might lead to more problems down the road is the fact that OLED screens are also sensible to pressure. Samsung claims it folded the screen 200,000 times with robots, but there is no word on human testers. Robots, however, apply even pressure and don't press down on the screen while folding, as we can see in Samsung's promotional video. In contrast, reviewers all have their own ways of closing and opening the phone, with some applying pressure right on the screen. In the long term, this could lead to screens breaking faster than the ones Samsung tested.

Also, as we can see in the video, there is probably less dust in this testing environment than there is silverware in your regular household.

Hopefully, Samsung can sort out these issues. The company already postponed the device's launch as it's taking a close look at the broken review units. The fact that the OLED screen isn't protected properly at the seam might lead to some headaches for the company's hardware team, as it probably needs to rethink the whole mechanism to make it dust-proof. What bugs my mind the most is that apparently no one at Samsung tested the device with their own hands and pockets, as this seems like an issue that could've been caught early on in the development process.