The Google Podcasts app is putting AI-generated episode transcriptions into good use with a couple of new features — one of them is live right now. Plus, we look over a useful timer for people who go to sleep with podcasts and a sorting button that's been long overdue.

Ramit wrote to us about that sorting button, now available on episode lists in the app, which allows people to display the newest or the oldest shows at the top. Since Google Podcasts autoplays episodes right down the show page, choosing the "oldest first" option would be a great way to binge an entire series.

Up next, we peep at the new sleep timer that appears on the in-app player. Users can configure the app to stop playing audio, setting times in 5-minute increments or selecting the "End of episode" option to prevent the next episode from playing.

Meanwhile, siiie points us to new instant Google search query suggestions based on the content of the episode. The suggestions are likely based off of a string of data the app generates from the episode description and a machine-generated program transcription — we picked up on that string in a previous story. 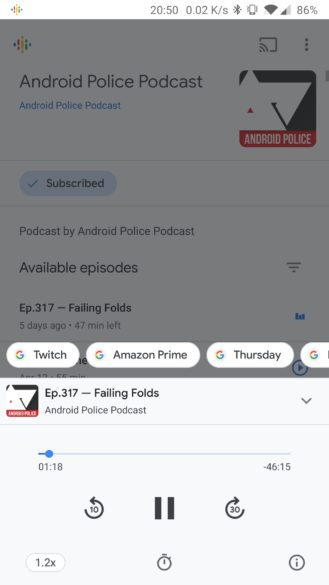 Speaking of transcriptions, we turn to XDA-Developers as it has flagged a very relevant feature that has yet to go public: transcriptions could soon appear in the in-app player by triggering a closed captioning button. 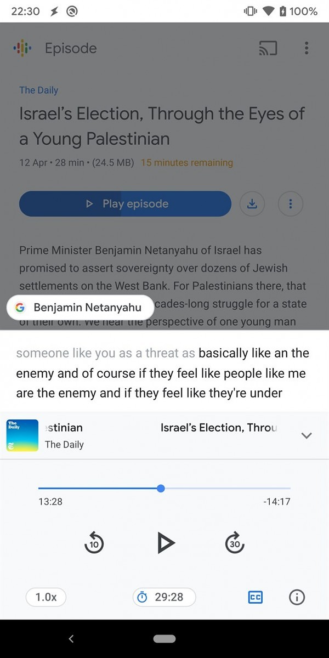 It appears as though words are displayed in black when they have yet to be spoken and then fade to a light gray once they've been said. We'll want to check the feature out if and when it appears in our app.

You can check out what's already going on with Google Podcasts by downloading it from the Play Store.