Gboard's latest update is out, but there no particularly notable differences have been spotted lurking in the interface. Instead, this update seems to be preparing a couple of changes that will end a year-long run for the Make A GIF feature and bring a couple data privacy options to users.

Sometimes it's good to remove features, especially if they're going unused, taking too much time to support, or getting in the way of implementing other features. Whatever the reason, it looks like the GIF Camera feature won't be around much longer.

Officially launched about eleven months ago, the GIF Camera (a.k.a. "Make A GIF") could be used to quickly build an animated image straight from the camera and send it directly to the current app so it could be used in an IM, stored in a note, or whatever else might have suited the moment.

A stack of new lines leave zero doubt that, "the GIF Camera feature will go away soon." Any custom GIFs you've made can be saved to your gallery, so you won't have to lose any of your recent works.

Gboard, like many of the most popular software keyboards, applies learning algorithms to identify the words and phrases you're using often in an attempt to make better suggestions, automatic corrections, and other shortcuts. A couple new settings are going to be added that may give a little more control over the collection and use of that data. 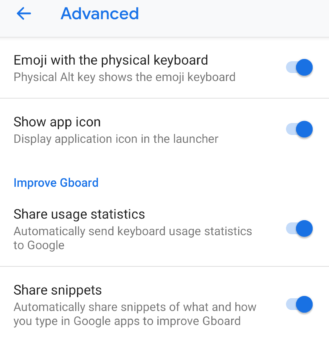 For quite some time, there has been a setting called "Share Snippets" that would allow Gboard to report back to Google with copies of phrases you have typed, all for the purpose of improving Google's language models. With the latest update, that setting appears to be removed, but it will likely be replaced by a pair of new settings: Personalization and Federated learning.

The "Personalization" setting appears to completely enable or disable Gboard's collection and adaptation of your habits, an option users haven't had before. Turning it off would presumably mean Gboard will behave as a fresh install, at least in relation to automatic suggestions and corrections. It could still use the language model Google has developed, but wouldn't use your personal behaviors to make fine adjustments.

The "federated learning" option is a spiritual replacement for "share snippets." To have it enabled is to give Gboard permission to report back to Google with what it has learned from your typing practices. The summary explains that only a typing model is sent back rather than the individual words, a concept explained by Google back in 2017.

Finally, if you're among the users that want to turn off personalization and eliminate all of the old data that was stored prior to disabling the setting, that option will be available to you. A simple command in the same screen will allow you to delete any words and behavioral data that was previously stored.

With new versions comes support for more languages. While it's hard to identify each and every one, I can at least show the list of the names added and hopefully you'll recognize one that matters to you or those in your life. Some of these languages may not be live yet, but the names are present in resources, so they're pretty obviously coming. (Sorry, some names and letters are lost as a result of software that doesn't support all alphabets, which is why they have question marks or boxes in your browser.)