If you're a U.S. passport holder or a Canadian with a B1 or B2 visa, you've probably found the Mobile Passport app to be an exceptionally expedient solution to getting past the immigration queues and out of the airport. But the latest update has brought a paywall to features you're used to getting for free.

Version 2.18 of the app, developed by Airside Mobile and endorsed by U.S. Customs and Border Protection, introduces Mobile Passport Plus: a $15 annual subscription for the ability to photo scan passport information and save that information within the app, all without encountering any ads. Customers are offered a 7-day trial. 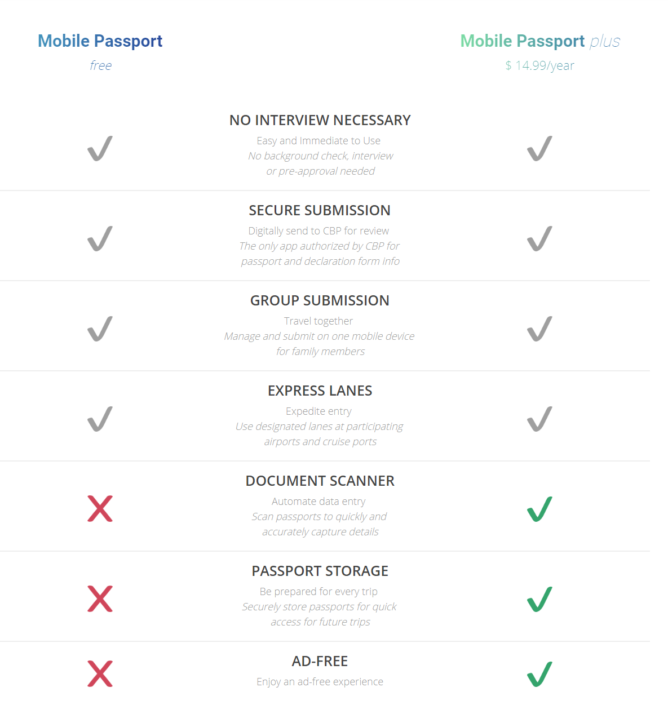 Other features, such as all-in-one group submissions and the express lanes, remain available for all users at the 29 U.S. ports of entry where Mobile Passport is accepted.

That sounds great and all, but the thing is these Plus features actually used to be free. There weren't even any ads to see in the first place. Here are some screenshots of the scanner and passport manager that we did not pay for from v2.16 of the app:

The latest update shows that the scanner requires a Plus subscription to activate. However, users can still save passports to the app by simply adding them on when starting a new CBP declaration. We were able to add the profiles we entered into the app this way to later declarations, though this writer has not been able to complete a declaration as he is not traveling.

Left: The scanner feature now needs a Plus subscription; Center, right: Users may still save passports through making a new CBP declaration

Airside Mobile says it will invest the subscription revenue into more features and maintenance for the app as well as entirely new products and services.

Still, even if the logging function were to disappear, we don't think these features are worth $15 a year for individuals — travelers are supposed to carry their physical passports anyway, so these features would only save them from 15 seconds of typing at best. Families and groups that frequently travel overseas and back again might find it handy to not have to put in the same lines of data over and over, but again, passport logging is still (just barely) available.

You can take a look at the changes for yourself by checking out Mobile Passport on APK Mirror or the Google Play Store.