Like many Google applications, Photos suffers from a case of one feature added, one feature removed. Just yesterday we talked about the app's new gallery view for non-backed up media, which replaces the disappeared backup indicator, and then someone brought to our attention another missing feature that has yet to make a come-back: yearly view.

Google Photos offers several views that you switch between by pinching and zooming: comfortable (super large thumbnails, 1-2 columns), day (large thumbnails, 4 columns), month (slightly smaller, 5 columns). It also used to have a yearly view that collapsed each month into only 28 photos, taking up three rows of tiny thumbnails. This made it easier to scroll back to a specific month, no matter how far back, and find those summer vacation pics for example. You then tapped to expand again to the month view.

The yearly view completely disappeared around the transition from Photos v4.10 to 4.11. You won't find the option under layout views, or by pinching and zooming. One day it was there, the next it was gone. I used to resort to it a lot and I've been missing it recently, though I'm not sure why I didn't put two and two together and look into whether it had actually vanished or was moved around. I'm glad our tipster brought it to our attention. 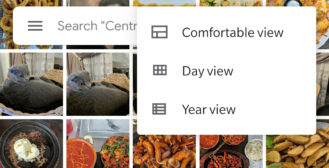 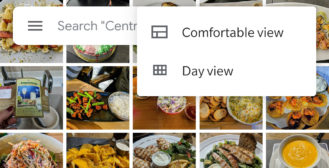 We're at version 4.14 of Photos now and there's still no sign of it coming back. As you can guess, users are pretty disappointed and have been asking for it on Google's support forums. Apparently, the view was also removed from the web version of Photos too, but it's still there on the iOS version. Can we have it back please, Google? It's much better than using the side scrollbar to scrub through months and years.