It's Google Fi's birthday (🎉), and to celebrate, the carrier is blowing out Pixel 3 phones. The Pixel 3 and 3 XL are half off for new and existing customers, which means you can snag one for as low as $399 — but the deal is only valid today, April 22.

Fi teased the promotion on Twitter a couple of days ago, basically saying outright there'd be a Pixel deal today. As far as carrier deals go, it's about as flexible as it gets: new and existing customers can get the special pricing, and it's up-front savings, not a bill credit. When you buy a Pixel 3 from Fi today, it'll be half off — you'll just need to activate it on your Fi account within 30 days of its shipping. 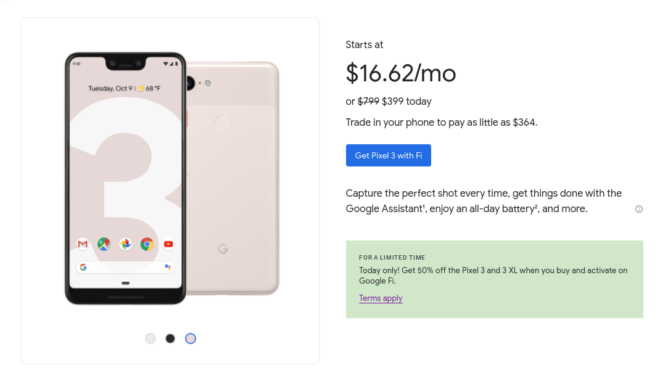 Here's what each model costs during the promotion:

You can read full terms and conditions for the sale here. Head over to Google Fi to snag your cheap Pixel.

[Update: Live for some] Google Photos will finally tell you which photos weren't backed up, ...