Google Assistant knows a surprising number of things. Ask it for the distance between the earth and the moon or who won the last Superbowl, and it will give you the correct answer right away. But like any virtual assistant, there are times when it just doesn't get it. It either takes things too literally or comes up with a completely unexpected answer. We've collected a few of these instances over the past months and thought we'd brighten up your weekend with them.

Spelling is hard, ask any middle schooler. Into, in two, in too, they all sound similar, and sometimes it's hard to guess from context which one is correct. Proof: @artemR managed to confuse Assistant with his advanced English request, so it had no other recourse but to set a same-day reminder to "check on [redacted] into days." 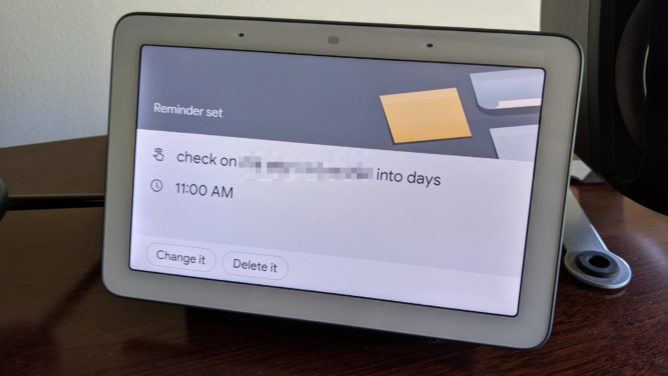 Trying to outsmart Assistant can result in some excellent literal vs figurative word play, as Redditor u/BoechtVanDunaldy proves to us. Who's calling the shots now? 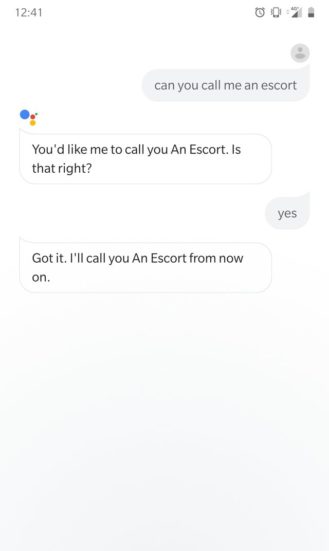 What?! How?! In which world...?! I was talking to my Google Home and it's safe to say the answer completely amused and befuddled me and my husband. We were shocked, we laughed, we rushed to stop it... and eventually I was curious to know what triggered that particular answer because it made no sense whatsoever. Turns out it was "silver Iraq." Still hilarious and crazy. 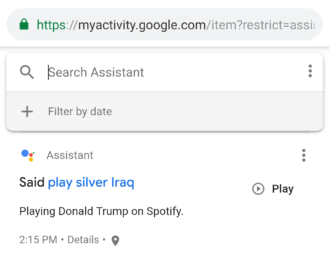 I love testing Assistant's smarts sometimes and asking it things I'm not sure it supports. This one threw me an unexpected curve-ball though. And if you're wondering, yes, it added proper apples to my shopping list. 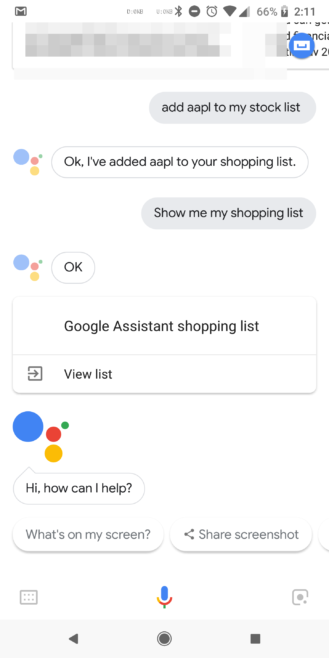 Imagine asking Google if it's stalking you and getting "you can be stalked and not even know it" as an answer. We all know that's happening, but did it have to admit it out loud? 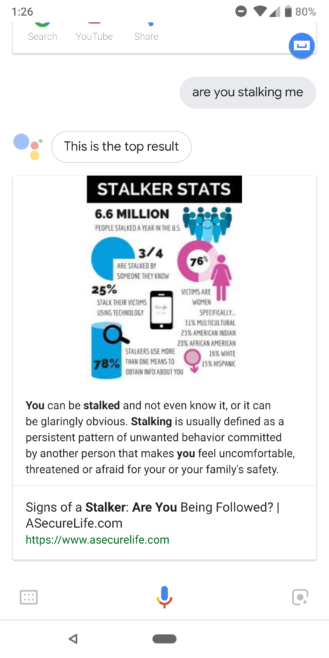 Assistant wants to assure you that your privacy and security come first, and your data is entirely safe with Google, but when asked about GDPR, it goes suddenly aloof. Attitude: will pretend GDPR isn't happening until that doesn't fly anymore. 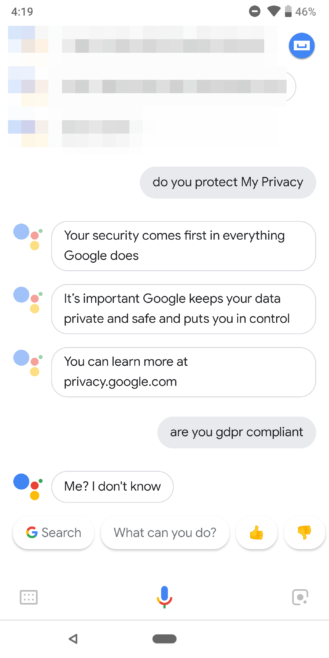 There are times when you want Google to send you a search result every day, like a currency conversion rate. All's good until you set the time and it forgets what it was doing. Where am I? What am I doing? Who are you? What is life? 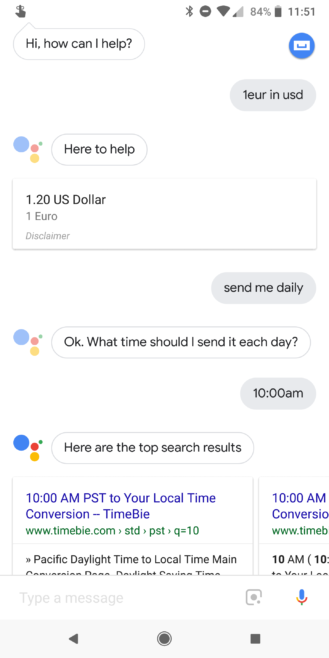 The lack of updates to Android's platform distribution numbers has caused some confusion among developers. For end users like @tabakajdin, it's also resulted in Assistant incorrectly guessing the latest version of Android. That's like someone asking you what's your age and you missing by a couple of years. But after thirty, who the hell keeps an accurate count? (Artem tried to replicate this and got an even more confusing answer.)

It'd be logical to assume that you could ask Assistant to turn on DND until your next alarm, right? Well, as tipster Asher Wood discovered, things can and will go wrong with that command. At least he won't miss the notification when Jesus is born. Whew. 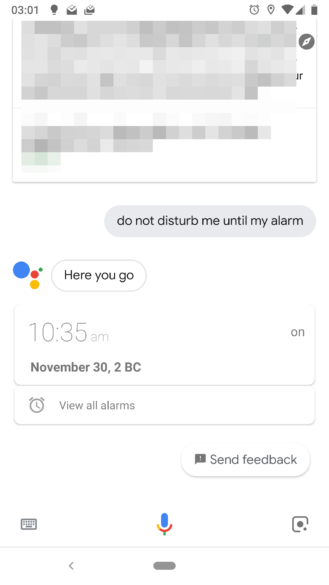 That above wasn't the only time Assistant got its timings confused. Android Police alumni @RonAmadeo has another excellent example. Props for getting the "30 minutes" part right.

Bottom to top, that's how you'll have to read this gem of misunderstandings provided to us by Nick Cipriani. From "define podunk," to "spell that for me," to "you did me dirty," Assistant gets it amusingly more and more wrong.

When Redditor u/Prudhvi4p showed Google Assistant his Home Mini speaker, it turned the deaf eye and pretended it didn't recognize its offspring. Oh, is that a ball? I don't know. I have no idea what that is. Time for a Maury Povich "Is he the father?" test to reveal the truth.

If you ever doubted that Lens needs a pair of, uhm, lenses, here's a pretty compelling evidence from @austinnotduncan. 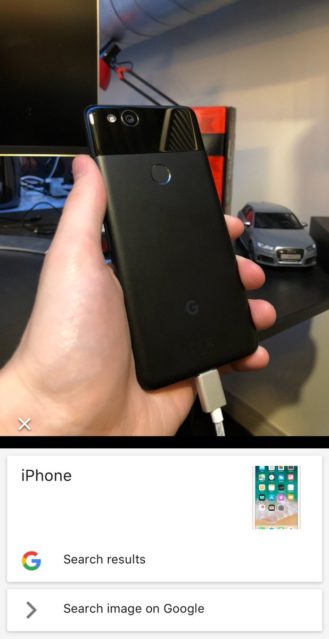 And that's it folks. Assistant can be amazing sometimes and ridiculous other times. If you have other examples of its funny or awkward shenanigans, let us know, and keep in mind that our inbox is always open for any screenshots you want to share.

I'll leave you with one last and memorably hilarious Assistant instance. It's infinitely funnier if you speak Arabic, but the translation gets the point across.

26 best new Android games released this week including Whispers of a Machine, Agatha Knife, and ...