It may be officially dead, but if you still want to use Inbox by Gmail for at least a few more checks on your messages, we have some good news: you can delete the app and download an older, working version from APK Mirror!

Version 1.78, released in October, was the last for the email client. Users who tap into it from today onwards will see an animated splash screen and a message urging them onto the main Gmail app:

Redditors in the r/Android community who refused to accept the demise of Inbox decided to pull up older versions of the app just to see if they worked. We checked it out ourselves and were able to affirm that we could manage reminders and receive messages with the v1.77 APK from September. We also were able to make Inbox work with v1.72 from May.

We suspect that Google will catch up to this discovery and cork up the floodgates. Either that, or it lets everyone ride the bull into the server shutdown. Nothing in life is for certain.

If you're still stuck on Inbox and don't want to go anywhere else (for the time being), we've got you covered over at APK Mirror. Vale Inbox!

Inbox v1.77 users have been reporting notification and automatic sync issues with the app on a Reddit thread. The original poster said that they weren't even able to manually request message syncing, though another commenter said that they could. A couple others noted that they've lost auto-sync and notifications on one Google account, but not another. Separately, one person wrote to us about their Galaxy Note 9 not being able to sync at all.

Yet another person on the thread suggested that they can re-enable the features by removing a Google account from their device, then adding it back. They should be able to see a sync toggle for Inbox in the device's account settings after using the app with the redeployed address — which should mean that auto-sync and notifications will work again. We have not lost these functions in our testing, so we aren't able to see if this procedure actually works. Other users have yet to report back on its efficacy.

Satheesh wrote in saying that their Inbox APK was updated and that they could not get an older APK to function.

We checked multiple devices which initially had Inbox v1.77 installed and found all of them moved to v1.78 with the Gmail transition message. After installing various older APKs just to make sure, we found that each generated the same result: Inbox would produce a sign-in splash screen, we would be prompted to choose a Gmail account to use, then a "Something went wrong" message appears. 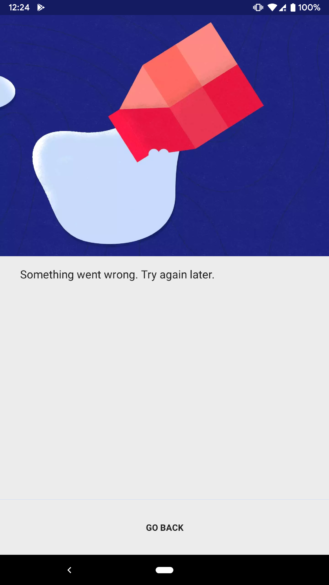 It is possible if you've set auto-updates off for Inbox that you may still have a functioning app, but unfortunately, that's not something we can recreate.

From when the app first died on April 2 up until now, we knew that Inbox was on borrowed time, so we hope that you've made the most of it.

[Update: Google comes through] Passive aggressive level: $9,000 — Instead of a refund, Google ...