Google Pay has improved steadily since the early days of Android Pay, with the ability to store boarding cards, coupons, and loyalty cards making it just about as useful as its iOS equivalent these days. You have been able to save local transportation tickets in certain cities for a while, but now the app is getting its first international rail partner.

If you're looking to travel between London in the UK and some of Europe's other capital cities (such as Paris, Amsterdam, and Brussels) and you would rather not take to the skies, the Eurostar is a fast, luxurious rail option that can get you there practically as quickly if you take airport wait times into consideration. Eurostar customers can now save their tickets to the Google Pay app. 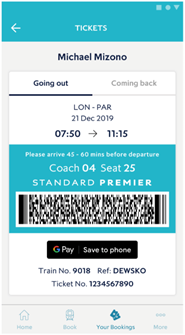 This is part of the company's bid to reduce paper waste by encouraging the use of mobile tickets instead, so there's even more reason to use the new functionality. According to Eurostar, you'll need to be using Google Pay on an Android device with Lollipop or higher. Once you've bought your ticket in the Eurostar app, look for the black "Save to phone" button with the Google logo. Eurostar mobile tickets can now be saved on Google Pay

Eurostar, the high-speed passenger rail service linking the UK with mainland Europe, is offering travellers a new way to organize and manage paperless tickets, by adding the ability to buy and save mobile tickets on Google Pay in a world first for any international rail company.

Travellers using Google Pay on Android L or higher devices can now simply save their mobile ticket to Google Pay from the Eurostar app, and proceed directly to ticket gates at Eurostar stations for a more seamless start to their journey.

The new option for travellers aims to further increase the use of mobile tickets, as part of Eurostar’s plans to reduce paper usage by 50% by 2020. Since 2018, the amount of paper tickets printed in stations has been reduced by one third, and now accounts for just 10% of all Eurostar tickets.

Perrine Allain, Head of Digital, Eurostar, said: “We are working to provide an effortless travel experience for all our customers, and by enabling paperless tickets to be stored on Google Pay, we hope that more travellers will be encouraged to switch from printing paper. High-speed rail is already an environmentally friendly option for short-haul international travel and encouraging more of our customers to use paperless tickets helps further reduce our impact on the environment.”

Enabling mobile tickets to be saved via Google Pay is the latest in a range of digital improvements from Eurostar. Earlier this year, Eurostar also made updates to the Eurostar app to help provide users with a new ‘arrival’ state. The update added features including public transport maps for the destination city and the ability to book tickets to attractions. Travellers can now find the lowest available fare using Eurostar’s Fare Finder available on Google Home and Google Assistant.

The Eurostar app can be downloaded through Google Play.

Ys VIII: Lacrimosa of Dana is coming to Android as a worldwide release