Apple and Qualcomm have settled their patent and royalty disputes, paving the way for the latter's 5G modems to be installed on the former's smartphones in the year 2020 and beyond. Intel, which staked its hopes on swooping up a meaty iPhone modem contract, has folded upon itself, announcing that it is ending development of its 5G modems for smartphones.

The company stated that it will fulfill existing 4G smartphone modem contracts, but won't pursue new ones pending a business assessment on 4G and 5G modems for PCs, internet of things products, and other devices. Intel will continue to focus on 5G network infrastructure.

The Apple-Qualcomm conflict has been developing for over 3 years based on claims against the chipmaker, for overcharging for its patent licenses, and the iPhone maker, for not paying due royalties. One of the effects this had was that Intel was invited to provide cellular modems for a portion of the 2016 and 2017 iPhone models before it became the exclusive supplier for the 2018 generation.

With market analysts speculating that Apple would release a 5G iPhone in 2020 and a years-long trial with Qualcomm about to go underway, Intel was viewed as a leading contender in a potential field of candidates, though its 4G technologies were tested to be inferior to Qualcomm's solutions and its 5G demonstrations weren't doing much better.

Today's settlement leaves Intel in rough waters. It is expected that Apple will also ditch the Core processor series for its Macs and replace those chips with its own design. AMD's recent competitive surge is also putting pressure on Intel's bottom line — Sony announced today it chose a Ryzen chipset to power its PlayStation 5.

Shares of INTC ended up 0.76% in Tuesday's main trading despite a dip as Apple and Qualcomm made headlines. Shortly after issuing its exit announcement, Intel stock surged 4% towards the end of the after-hours session. 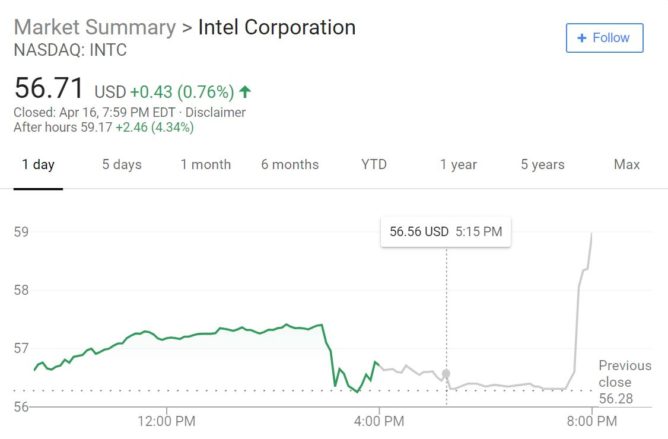 The full press release is available below.

SANTA CLARA, Calif., April 16, 2019 – Intel Corporation today announced its intention to exit the 5G smartphone modem business and complete an assessment of the opportunities for 4G and 5G modems in PCs, internet of things devices and other data-centric devices. Intel will also continue to invest in its 5G network infrastructure business.

The company will continue to meet current customer commitments for its existing 4G smartphone modem product line, but does not expect to launch 5G modem products in the smartphone space, including those originally planned for launches in 2020.

“We are very excited about the opportunity in 5G and the ‘cloudification’ of the network, but in the smartphone modem business it has become apparent that there is no clear path to profitability and positive returns,” said Intel CEO Bob Swan. “5G continues to be a strategic priority across Intel, and our team has developed a valuable portfolio of wireless products and intellectual property. We are assessing our options to realize the value we have created, including the opportunities in a wide variety of data-centric platforms and devices in a 5G world.”

Don't panic: Emails about Samsung Email accessing your Gmail are legit, Samsung is working on a fix

AMP Stories will roll out to mobile Google Search soon