Google Maps offers a lot of crowdsourced information. Some of it is based on user input and some other info is calculated automatically by Google's algorithm, such as the crowdedness of an attraction, difficulty to find parking, and more. While it's relatively easy for an algorithm to tell if you'll face traffic on your drive — and with decent accuracy — it's much more difficult for it to know if your underground subway will be crowded or not. You need a reliable source for that info, and Google seems to be working on that.

Maps is starting to surface a notification for those who use its public transport routing to ask them how crowded their train was: did they find many seats, only a few, was there only standing room, or were they crushed by other commuters?

This is the first time we've seen these questions on Android, though they've been surfacing for several months for iOS users. Our Android tipster is in Sweden, but iOS reports also spanned subway systems in the Bay Area, New York City, Washington, Tokyo, and Paris. 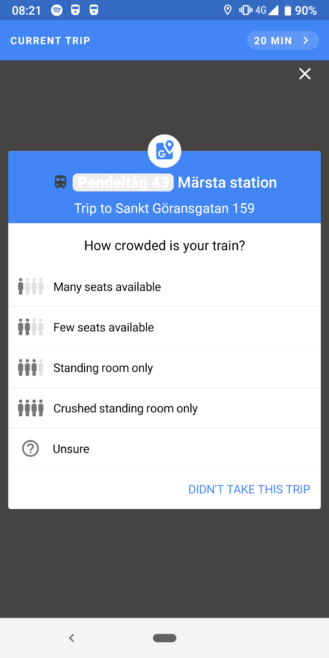 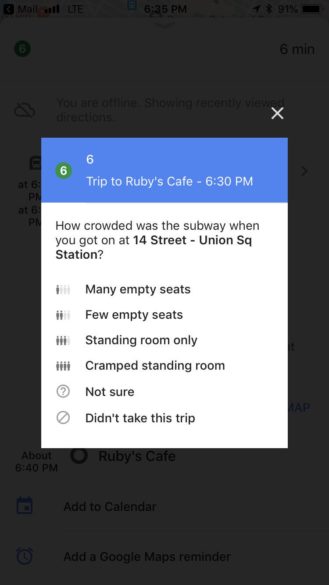 Left: Crowded train pop-up on Android. Right: And on iOS.

Last year, Google announced that it had partnered with Transport New South Wales in Sydney to tell you how full your bus or train will be. It said that the feature would be coming to more cities around the world, but we've yet to hear a peep about that expansion. Perhaps the Mountain View giant has found it better to crowdsource the data than try to partner with each public transport company separately, that is if said company has that data to begin with. Or perhaps Google is using user reports to improve on the existing data it will get from its partners. We'll have to wait and see.

RIP: Insignia's cheap and popular Assistant-equipped speakers have been discontinued