If you own a Samsung phone, you may have been confused by an email Google sent out today regarding the Samsung Email app. Users were told that the app, submitted by an "unverified developer," was granted access to their Google account and was authorized to "read, compose, send, and permanently delete" any message within their Gmail account. The good news is that Samsung is aware of the issue: it is advising its customers to not act on the alert.

Complaints have been stacking up in the Gmail Help community all day. Some commenters reacted by changing their passwords and revoking access for Samsung Email, known simply as "Email" on Galaxy devices, only to be left with notifications saying that the app cannot access messages from a registered Gmail account. Others questioned if the message was legitimate with a number speculating that the alert was part of an elaborate phishing scheme — one person referenced similar alerts going around for the Google Wallet app.

If you got Google's email about Samsung Email, a check on the permissions settings in your Google Account dashboard should verify that the alert is real. In nearly all of the cases we've been able to find, commenters said that the permissions were granted from the very IP addresses of their Samsung devices. 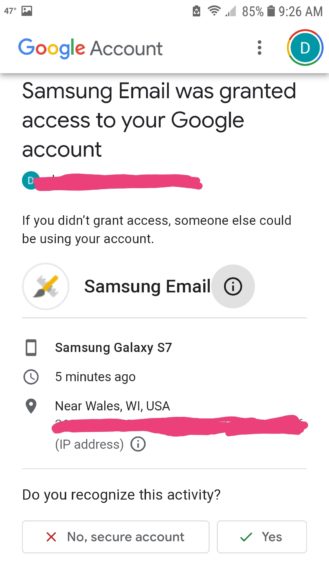 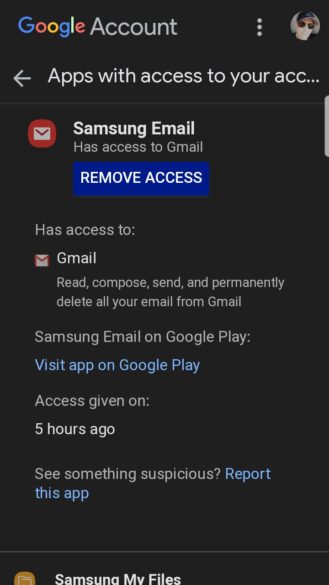 More importantly, we called Samsung customer support and were told that the company is aware of the issue and is working with Google to resolve it. The representative suggested that the problem may be rooted in Google enacting a new security protocol. Again, we stress that users are encouraged to disregard the alert.

We have also contacted Google for comment and will report back if we receive one.

In short, keep calm and carry on.