What's next from Motorola? As we leave behind the Moto G7 series, we're left in a holding pattern for what might be a foldable phone that will bring up the legacy RAZR name. It's been a month since we last heard anything about the speculative project, but we now have some evidence from the Bluetooth SIG that there is at least a RAZR phone in the works along with a potential Android One phone.

A document filed on the Bluetooth Launch Studio platform today, picked up by XDA-Developers, shows that a device named "motorola razr" with model number XT2000-1 is indicated to be headed for Verizon Wireless. The device has been certified to be compliant with the Bluetooth 5 standard. 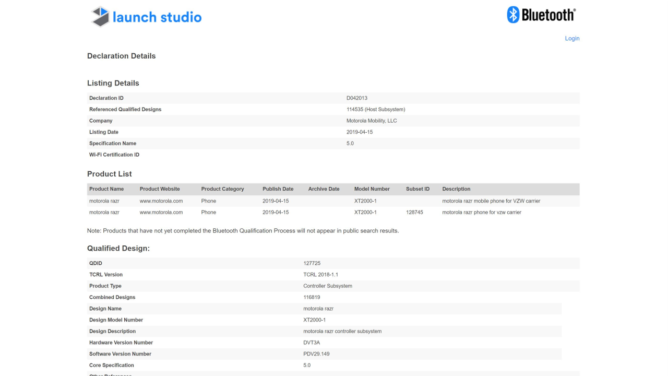 The Wall Street Journal reported from sources in February of Motorola's purported plans to produce up to 200,000 folding phones, perhaps with the RAZR brand, for $1,500 apiece exclusively with Verizon. It was suggested that the phone could've been released that very month, but that obviously did not happen. Motorola, however, did later confirm that it was looking into producing foldable phones. In March, it was rumored that the device would adopt a clamshell design with a small secondary display for minor tasks — not up to the capability we see with the Samsung Galaxy Fold, which is on pre-order right now.

Catching up with another set of Motorola devices, we're also seeing a series of five devices that have model numbers starting with "XT1970" being certified with Bluetooth 5 under the unified name of "motorola one vision." The main differences between variants is whether they have one or two SIM slots and in which regions they're meant to operate. 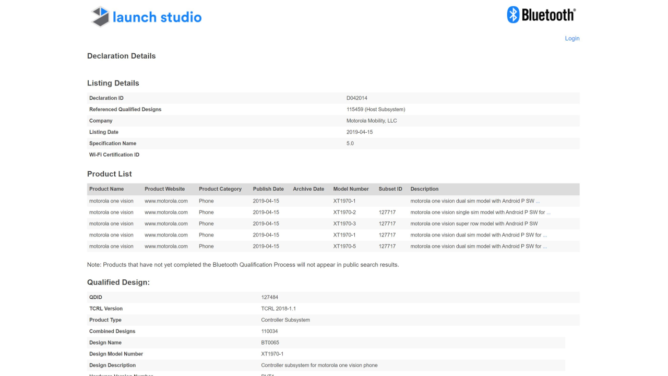 Last week, Google had listed a "Moto One Vision" as a device that supported ARCore, though it has since removed that mention from its rolls. It's been claimed that this device will be a follow-up to the Motorola One and Motorola One Power from last year, featuring Android One and a 21:9 display.

Neither of these documents specify when we'll see these phones come to market, so we're going to have to keep an eye out on more information. Stay tuned.

Make your home safer and get a free Echo Dot with these discounted Ring alarm kits, video ...