Right now, the dominant trend in flagship smartphone design is one of refinement. Instead of aiming to sell shoppers on the appeal of tricks like modular hardware, or overloading a handset with gimmicky sensors, successful phones are instead trying to achieve the platonic ideal of basically existing as little more than one big screen. That's driven recent efforts like the proliferation of in-display fingerprint sensors, pop-out selfie cams, and the evolution of the notch to hole-punch designs. But you wouldn't know much of that, to look at the LG G8 ThinQ.

LG helped lead the way with extra-tall, face-filling screens on phones like the G6, but since then the manufacturer's let progress get a bit away from it, and in many ways the G8 feels like a phone that would fit in better with 2018's crop. While a clear evolution from the G7, the G8 doesn't seem to do enough to stand out on its own, and though it's still a handsome, solidly equipped powerhouse, will shoppers find enough of the refinement that's behind some of the G8's fiercest competition?

LG was clearly pleased with the look it came up with for last year's G7, as the G8 does not fall far from that tree. The handset keeps the same basic design, sandwiching a curved-edge metal frame between front and rear glass. And while the overall build doesn't stray far, mainly tightening things up with a slightly shorter body (by way of shaving down the screen-bottom bezel), LG's execution is somewhat improved, and those curved edges feel even nicer, lacking the G7's sharper screen-edge transition. 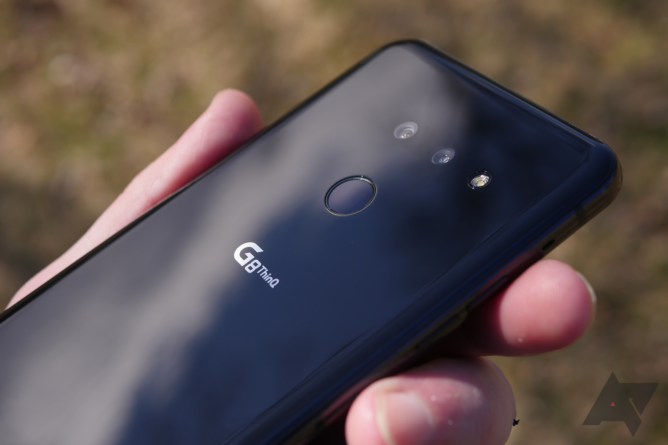 While handsome, the G8's rear glass is unfathomably slippery.

Button and port layout is more or less the same, keeping the same discrete volume controls and dedicated Assistant button as the G7. Really, the biggest change here is moving the SIM/microSD tray from the phone's top edge to its right side, under the power button.

More significant changes arrive around back, where camera orientation doesn't just return from the G7's vertical to the G6's horizontal arrangement, but LG manages to remove its camera bump entirely, mounting all of this year's hardware flush with the rear glass.

I can't say with complete confidence that this a direct consequence of the newly flat back panel, but somewhere between that change and the overall smoothing-out of this year's design, the G8 became the slipperiest phone I've used in recent memory. 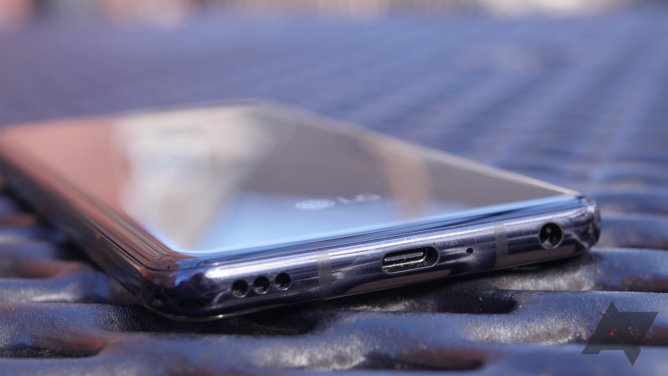 While I normally consider myself a more-cautious-than-usual phone owner, the G8 has still managed to careen off of tables to the floor below no less than a dozen times since I unboxed it — it happened again just now, as I'm describing the behavior. To LG's credit, none of these drops has yet to visibly damage the G8 (protected with Gorilla Glass 5 in the front, and GG6 in the rear), but that day feels like it's very much in my immediate future. I hate phone cases with a passion, but I may have no other choice if I want to save the G8 from destruction.

Up front, LG delivers two big changes. Instead of another LCD panel, this year the G8 moves to an AMOLED screen. Brightness doesn't get anywhere near the G7's insane boosted-mode output, but I still had little problem seeing the screen even in direct sunlight. 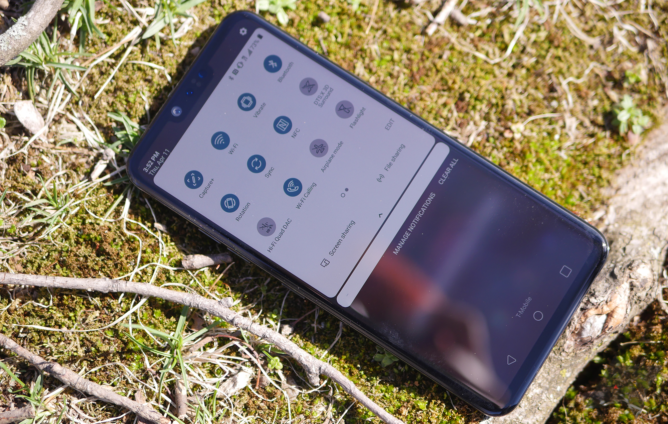 The new AMOLED panel fights for visibility against intense sunlight.

LG also fiddles about with what's going up on in the screen-top notch, and ends up using the space where you'd previously find the standard earpiece speaker for a new time-of-flight camera and IR illuminator, enabling some fancy selfie effects and helping with face-unlock security. Without that earpiece, LG uses a tech it calls Crystal Sound to effectively turn the display panel itself into a speaker.

I didn't expect a ton from Crystal Sound audio quality, but it's really not that bad, and while I suspect a traditional speaker would sound more balanced, especially when combined with the G8's bottom-edge speaker the output here is decent enough for enjoyable media consumption. 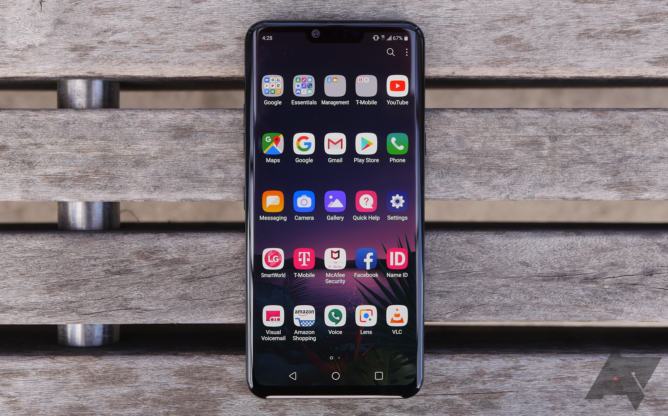 Water resistance is once again present with an IP68 rating, and support for wireless charging is back to give users another option for keeping the phone's very adequate 3,500mAh battery topped off.

LG packages the G8 with a USB Type-C cable and a newly matte-finish wall charger, but that's basically it so far as in-box accessories go. OK, so there's also the nice bonus of a cleaning cloth, but nothing so extravagant as headphones.

The system software on LG phones has never been a huge draw for me, but neither does it get in the way to the point where it negatively impacts my experience — at least after a few minutes of initial configuration. Instead of dwelling on the G8's Android 9 Pie implementation, instead I'd like to look closer at how well the software behind some of the phone's more “gimmicky” features works. 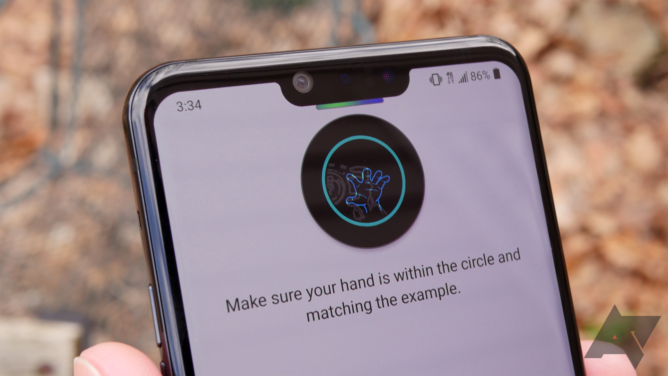 LG wants so bad to make Air Motion work but it remains awkward at best.

Easily the most discussion-worthy one there is LG's Air Motion system, which taps into the depth-sensing abilities of the front-facing camera package to let users control the G8 via in-air hand motions. In theory, you simply hold your hand in front of the phone, perform LG's prescribed recognition gesture, and then slide your hand from side to side to quick-launch apps or control media playback.

This feature seems plagued from the start, and I just can't understand what's driven LG to highlight it so heavily. The initial tutorial is difficult to follow, a situation not helped in the least by the fact that the phone keeps prompting you to put your hand in front of the screen, obscuring the directions it's giving you in the process.

Ultimately Air Motion does work, but getting it to do so consistently feels like more of a chore than most new G8 owners will choose to subject themselves to. Even if it functioned perfectly, I just don't think there's enough appeal here to draw users away from more straightforward touchscreen controls. 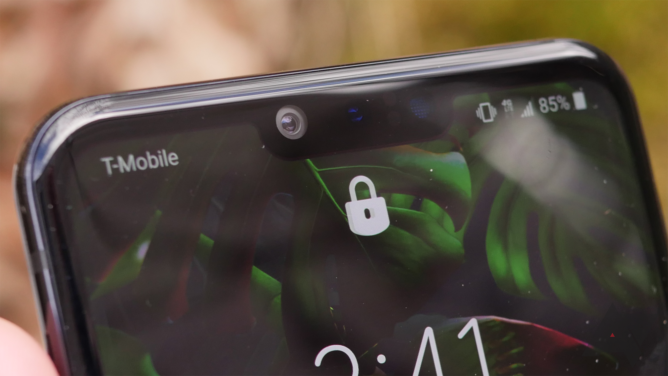 The same ToF camera that powers Air Motion also supports two biometric authentication schemes: Hand ID and 3D Face Unlock. Hand ID works not unlike Air Motion, only here the phone's scanning your hand shape and vein patterns in an attempt to identify its owner. Face Unlock similarly employs that depth-sensing hardware to map the contours of the user's head. In practice, both work fine, but neither is fast nor consistent enough to be superior to the phone's rear-mounted fingerprint scanner.

Powered by a Snapdragon 855 chip, the G8 is as speedy a smartphone as you'll find right now, but its 6GB of RAM is on the lower end of the flagship range. I can't complain about the 128GB internal storage, though, which especially when augmented by a microSD card gives the G8 practically all the space you could hope to need.

The 3,500mAh battery LG gives the G8 feels about right for this hardware package, striking a nice balance between capacity and phone size. I easily got more than a day of operation on a charge, and between wired and wireless charging options, it's no headache to keep the phone powered. Well, that's assuming it doesn't slide off your desk while charging — I've even had it slip right off rubber-topped (and seemingly level) wireless charging pads.

Much like G8 itself, the phone's camera package is put together nicely and performs quite well, yet still can't seem to shake off the specter of some unnecessary gimmicks. The hardware itself makes a few changes from the G7, dropping the primary camera's resolution to 12MP (wide-angle stays at 16MP) but also bringing OIS to both sensors.

And in your standard point-and-shoot operation, that all works great, tackling tricky exposures without much trouble and just generally producing some really pleasing shots. The flexibility of the wide-angle lens remains great, and autofocus is fast and largely precise. We get more of the same sort of AI-assisted photo enhancement we saw with the G7, and though it remains an effortless way to stylize your shots, it's still not delivering a ton of real value.

New features this year include a video-bokeh mode that really didn't need to exist, and a low-light Night View mode. That one is obviously trying to capture some of the Pixel Night Sight magic, and while it does produce brighter images than shooting without it, we're a far cry removed from Pixel performance here.

The 8MP front-facer is a similar story, in that it also produces some great straight-up photos, but flounders a bit when trying to do more — here, to use the phone's depth-mapping hardware for its own bokeh mode. Even with that extra assistance, I get the same kinds of edge-detection problems that you'll see with software-only solutions.

Maybe. It really is a premium-feeling phone, with the performance and features users expect from a flagship. It's got all the power it needs, ample storage, and some new hardware like the Crystal Sound display-speaker offers a next-gen hook. The cameras are very capable, LG's excellent support for wired headphones returns, and the G8's just overall a pretty respectable piece of kit. 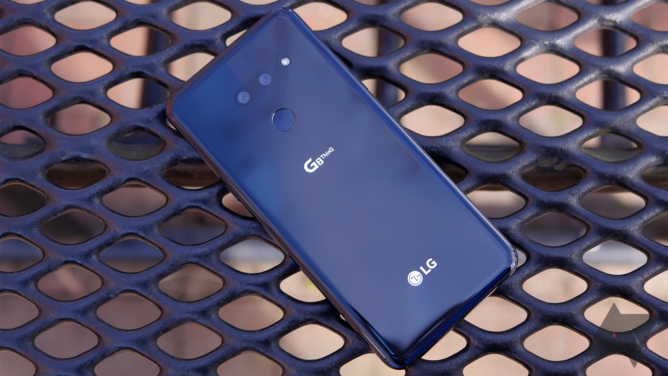 But for all I like about it, it's just way too conservative an effort. Instead of pushing the envelope in smartphone design, it's instead more of an LG G7.5. Some companies could coast by with a handset like that, no problem, but LG is not currently in a position that affords it that luxury. And compared to efforts like Samsung's Galaxy S10 series, the G8 felt behind the times before it even hit stores.

Then there are the things that don't work well, like Air Motion — and even the biometric features that are only OK end up feeling like negatives compared to some better-executed systems from peers. Though it probably seems silly for me to be talking about how impossibly slippery the G8 is as much as I have, I'm convinced this phone has a death wish and won't be happy until it's shattered on the floor. 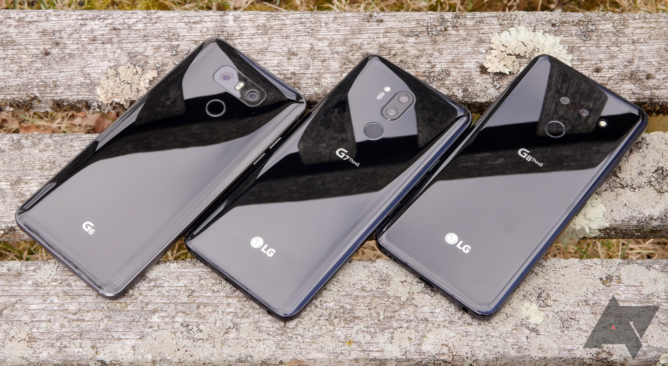 Little issues like those all take away from the G8's polish. As a result, I really wouldn't recommend paying a super-high price for the phone. Luckily, you can already find the handset discounted down to $650-700, well below the $850 MSRP. At that range, it's worth considering, and the lower it drops the easier that decision gets.

Ultimately the G8 feels like a phone that's running out of ideas. It's better than its predecessor in most of the ways that matter, but it lacks the sort of direction that I really expect to see from a major-brand flagship in 2019. LG doesn't need more hardware gimmicks, and instead should sit down and really think about where it wants to see phone design go over the course of next decade. Bring us a G9 that embraces that vision, and then we'll have something to talk about.