At a live-streamed event today in Bangkok, Samsung president DJ Koh took to the stage to unveil the Korean company's latest A-series smartphones. The headline A80 features an almost bezel-less display with a rotating rear camera that can also be used for selfies.

Without a doubt, the A80 is the more interesting of the two new phones. Its 6.7-inch FHD+ Super AMOLED Infinity Display has no notch or punch-hole cutout for a front-facing camera, and only very minimal bezels on all sides. Instead, it has a mechanical sliding and rotating action that allows the triple rear camera module to face forward when called upon — a solution like no other we've seen before. 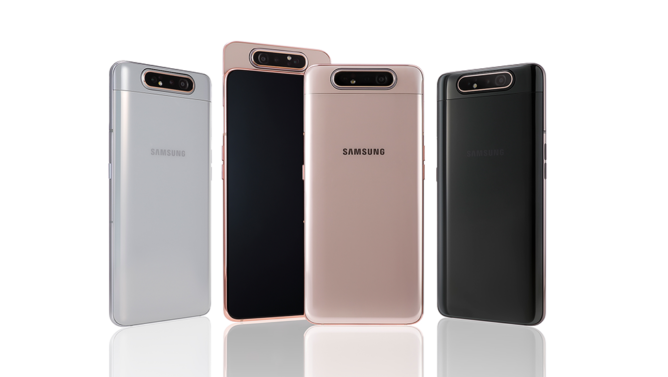 The three cameras consist of a 48MP main sensor, 8MP ultra wide (123-degrees) and a 3D depth sensor. Other specs include an unnamed octa-core chip, 8GB of RAM, and 126GB of storage. The battery has a capacity of 3,700mAh and is capable of 25W fast charging. At the same event, Samsung also re-announced the Galaxy A70. Like the A80, it has a 6.7-inch Infinity display with an on-screen fingerprint scanner, but it also has a more traditional — by 2019 standards — waterdrop notch. It features a slightly less powerful processor, 6 or 8GB of RAM with 128GB of storage (expandable), and a 4,500mAh battery. For cameras, it's got a 32MP main, 5MP depth, and 8MP ultra wide on the back, plus a 32MP selfie cam. 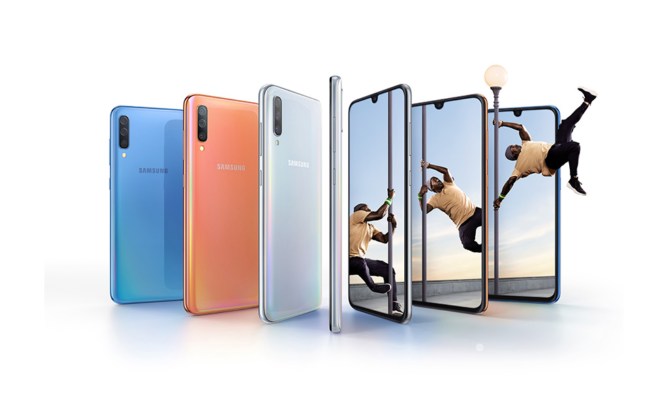 Both phones will ship with Android 9 Pie and Samsung's One UI skin. The A80 launches May 29 in three colors: Angel Gold, Ghost White, and Phantom Black. The A70 comes in Black, Blue, Coral, and White. Pricing info has not yet been shared.