Android used to be the Wild West when it came to permissions: Apps would tell you what parts of your phone they needed access to before you installed them, and you could either accept that or not use the app at all — it was an all-or-nothing deal. Over the years, Google got its act together and realized that wasn't the best approach (overshooting the mark at times). Android Q steps up that game for apps that still rely on this old API, asking users to choose which permissions to grant before starting these apps for the first time.

When you install an older app like Terminal Emulator or AZ Screen Recorder, the Play Store will greet you with the familiar sheet showing you which functions they want to access. You tap "accept," as you always do, and the app installs. But then, the first time you open it, you'll see a new screen that allows you to toggle off certain permissions. If you do that, Android will warn you that the app in question was designed for an older version of Android and that it might not function as intended should you disable anything. 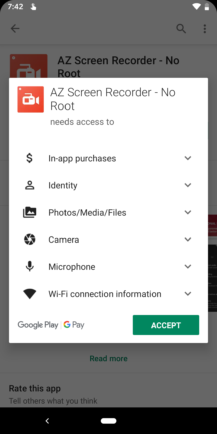 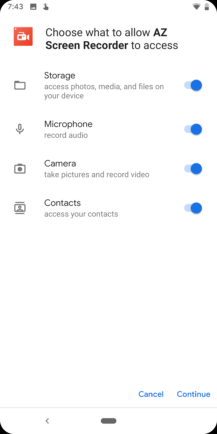 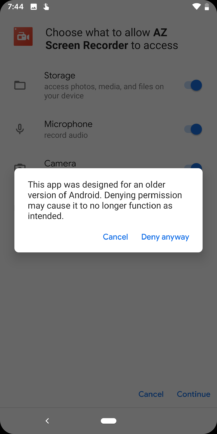 From a privacy standpoint, this is a welcome addition, since it allows you to use older apps without worrying about them going rogue on your device. However, I can't help but wonder whether that's a reasonable addition or just lip service to privacy. Apps with this deprecated permissions model are few and far between ever since developers publishing to the Play Store need to target Android 8.0 or higher.

Also, note that this feature is not entirely new: You can revoke permissions for older apps on Android P, but only after you grant them all-access when installed. Oh, and you actually need to remember to dig into the apps' settings in the first place.

It looks like Android Q beta 2 takes things a step further for legacy apps. Even if an app was installed prior to upgrading to Q, and technically granted its permissions right upon installation from the Play Store, Q surfaces the permission manager the first time you open it. (The screenshot below says the app has been updated, but it wasn't, so some rewording may be necessary to clarify this for users.) This reminds you that the app has certain privileges and lets you deny them before you launch it again. Thanks, Samarth Verma!