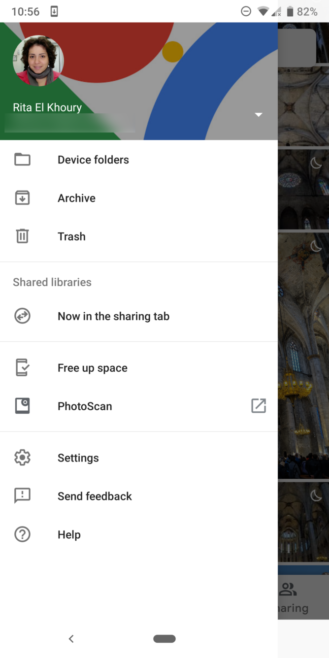 Along with the removal of the cover photo, the app has also streamlined the menu. Gone is the Now in the sharing tab option, as that was just another way of accessing the Sharing button in the bottom navigation bar (you can even see it as "-aring" at the bottom right of the screenshots above). Help and feedback, previously two separate options, are now consolidated into one point. Other items are shuffled around a bit, with Free up space and Settings moving up a little, further away from our thumbs. The very bottom of the sidebar now links to the privacy policy and the terms of service.

This change shouldn't come as a surprise as Google's latest Material Design guidelines discourage the use of cover photos in the sidebar. Many of the company's other apps already sport updated menus without them, and Google Photos is just following along, stepping further away from its legacy in the process.

The new navigation drawer is rolling out as a server-side change, so even if you're using the latest version (4.13 on APK Mirror), you're going to have to be patient if you don't see it yet.

Unlocked Samsung Galaxy S9 as low as $400 from Best Buy, down to $500 at various retailers