If you're in need of a cheap phone, the Moto G line is almost always a great option. The venerable series has practically redefined what it means to have a good budget phone here in the US, so when we see discounts off the already low prices, we pay attention. Right now, both the Moto G6 and G6 Play have dropped to $159.99 and $149.99, respectively, at several retailers.

Both models come with 32GB of storage and 3GB of RAM, though the Play has a slightly lower HD+ resolution on its 5.7" display to the G6's FHD+, but it sports a larger 4,000mAh battery. Neither will be performance beasts, but for the money, you'll have a hard time beating the overall value. And at time of writing, you're not even limited to just the black color option for the G6. 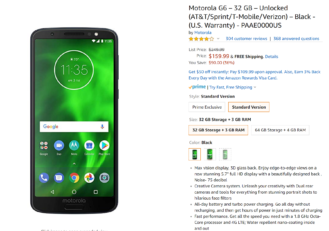 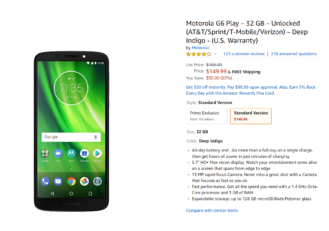 As I said, you have a few options on where to buy from, all of which will be listed below. Just take your pick and which phone you want — we recommend spending the extra $10 to get the G6, but that decision is ultimately up to you. Best Buy was also included up until a little bit ago, but the company raised the prices back up to normal. However, you can still get a G6 for $150 or a G6 Play for $100 from there if you activate today.