In Android P, Google rolled out a developer option to enable MAC address randomization, but it was turned off by default. With the first beta of Android Q, the option became the default, but we hadn't taken the time to look at it before, so let's do so now.

A MAC address is your device's unique identifier and can be used to track it on WiFi networks. Say there are various municipal hotspots across your city; your movement can technically be tracked by just monitoring when and where your device scans for these networks. Android 6.0 added randomized MAC addresses when scanning for WiFi but still showed your proper one after establishing a connection. With Q, the big change is the address will stay random even after you connect to a network, thus hiding your unique MAC. (However, it won't be randomized on every connection to the same network, so don't expect to see a different one each time you come home, for example.) 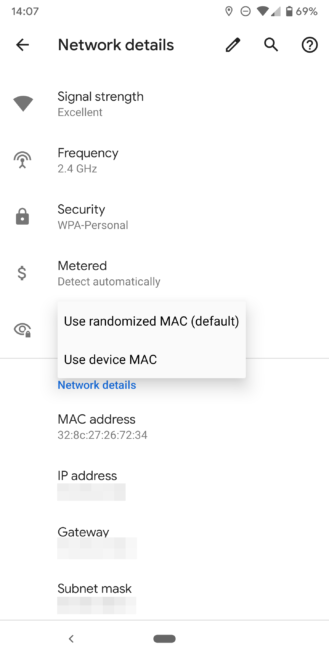 The behavior is now the default one for any new network your device connects to. It can be controlled on a per-network basis by opening its WiFi settings, expanding the Advanced options, and tapping on Privacy. If your phone had already connected to this network before updating to Q, it would still be using the device's default MAC, but you can change it here.

If, for some reason, you don't like the randomization, there's a feature flag in developer options to disable it as default. In that case, your MAC address will be used as is with any new network and you can manually force it to get a random one. As for apps, developers have the option to request both the randomized and factory MAC addresses, so they shouldn't have issues working on any network.