What do you do when your reputation is declining and you need a shiny new product to give you a boost? Add more cameras, of course. Motorola appears to be plowing ahead with Moto Mods despite them not being a very good idea in the first place and the G-series' best days might be behind it. There's also little to suggest that a new RAZR device with a folding screen will be any good, but maybe a new quad cam phone is will be the answer to the Lenovo-owned company's problems.

According to renders created by @OnLeaks (shared by KashKaro), once again based on CAD designs, Motorola will release a phone with four rear cameras and a waterdrop notch on the front. This being a Moto device, of course, there's still a sizable chin complete with a 'motorola' logo. The renders suggest that the main sensor will be 48MP, but there's no other evidence to support that yet. 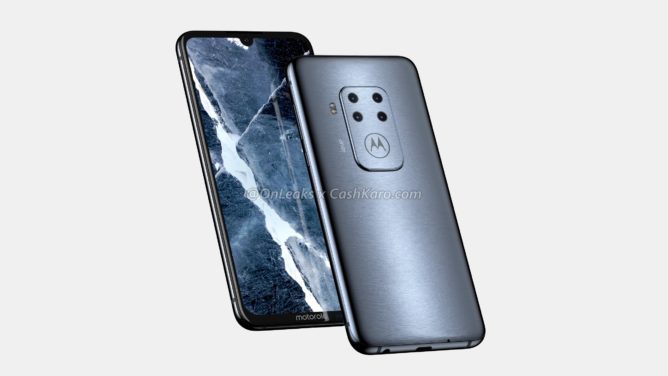 No prospective name has been mentioned, nor is there much known about the probable specs. A 6.2" display with an on-screen fingerprint scanner is one rumored detail outside what we can see from the renders. The phone will apparently be 8.8mm thick excluding the camera bump, which adds 1mm. We can see that a USB-C port and headphone jack are both on board, and there's also a thin earpiece at the very top of the display above the waterdrop notch. It's unclear at present whether it will have competitive flagship specs or if it will represent a brand new series in Motorola's portfolio.

T-Mobile's future video streaming services will include content from Viacom