Verizon flipped the switch early on its two-city mobile 5G network today, and has already started sending out the software those first users will need to access it. Moto Z3 owners are currently getting an update delivering support for the 5G Moto Mod, and if that weren't nice enough, the update also just so happens to bring Android 9 Pie to the phone.

Motorola had already teased release notes back in late January telling users what improvements to expect from the Pie OTA, such as network connectivity support for the 5G Moto Mod. At the time, though, we still had no clue of when Verizon would release the software.

Pre-orders for the $200 add-on finally began three weeks ago with the aim of getting customers ready for the planned debut of 5G on April 11. Verizon has pushed up its timetable for flipping the switch on its network by a week, but we're still waiting for confirmation of Moto Mod deliveries. 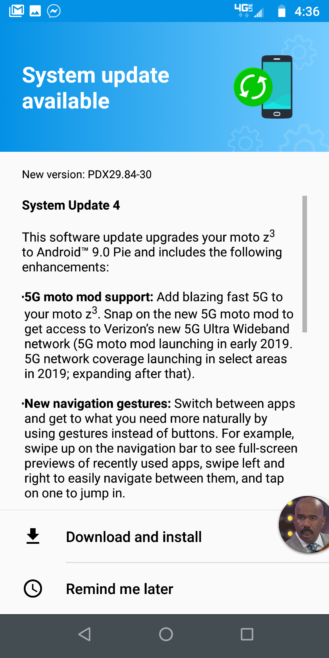 Software version PDX29.84-30 was released yesterday and features the March 1 patches from the Android Security Bulletin. Just like any other Pie update, this one has all the cool features you've come to expect like Adaptive Battery and new emoji. It also makes shifts to the system UI, such as bringing the time to the left side of the status bar.

But the most important thing for 5G Moto Mod customers at this point is that they'll soon be able to tap into the 5G network they're paying dearly to use.