How does Warp differ from a conventional VPN? For one, instead of using a TCP derivative, Warp communicates over a UDP-based protocol. Generally speaking (for those of you who aren't network engineers), data packets coming through UDP are not processed for sequencing and lost packets aren't sent again. While that might not sound like it would achieve the most reliable results, Cloudflare says its VPN minimizes retransmissions in fringe connection areas and is able to quickly recover from signal loss. UDP is also better suited than TCP to serve mass audiences at optimal speed.

All traffic is encrypted from the user to "the edge of the network," ensuring at the very least that Cloudflare and subsequent web hosts can't peek at your data. The company says it keeps traffic logs for 24 hours only for debugging purposes before deleting them and has frequent, independent audits.

Cloudflare is utilizing technologies and talent it acquired from Neumob in 2017. This was done in tandem with building more network nodes to expand server reach and reduce latency. 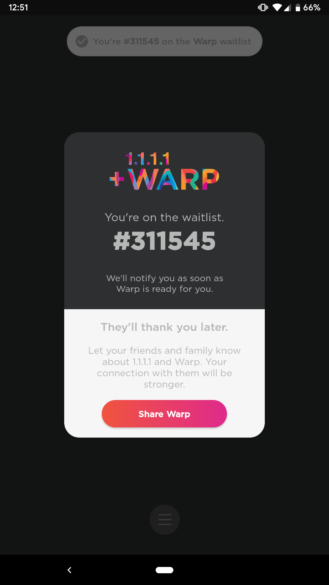 1.1.1.1 users can open the Android app and join the Warp waitlist — we joined it at 9a.m. PDT and were marked as #311,545 in line — which Cloudflare expects to have all cleared up by July. An enhanced Warp+ VPN service with optimized server routing and other privacy measures will come at a later date for a "low monthly fee." A desktop version is also due at some point.