I'm sure we've all wanted to send an email at one point but decided not to because the timing was inappropriate, leading us to forget sending that message or get to it a few days later than intended. As shown in the GIF above, Gmail will soon get a new "Schedule email" option. You'll be able to pick between a few presets (tomorrow morning, tomorrow afternoon, or Monday morning) as well as choose the exact date and time you'd prefer. Update: Scheduled emails are coming today and will work on both mobile and desktop. We'll let you know if the former requires a new APK.

In addition to scheduled emails, Smart Compose is getting some improvements. It's now available on all Android devices (which we already knew) and in four more languages beside English: French, Italian, Portuguese, and Spanish. Plus, it will begin suggesting subject lines based on the email's content, and can adapt to the way we write instead of offering blanket suggestions.

With Inbox's death scheduled for tomorrow, these improvements are definitely welcome, but they're still a far cry from what users wanted to make the transition easier: bundles.

Schedule Send is live in Gmail on both Android and web. It's likely the feature has rolled out a while ago, but we didn't notice it immediately. 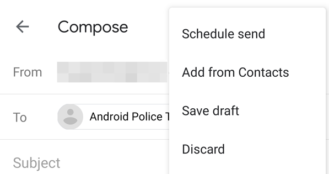 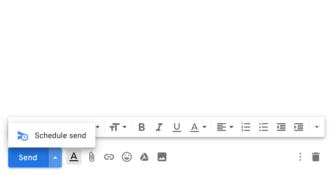 Left: Schedule send in Gmail's Android app. Right: And on the web.

Samsung promises monthly updates for the Galaxy S10 line-up, moves down the S7 to quarterly updates