In just a couple of days, Google is set to finally, sadly kill Inbox. The much-loved email client for Gmail may not have supplanted the original's popularity, but its unique feature set paired with a minimal and pleasing interface earned it plenty of fans, with many of them claiming they would hang on until the cold and bitter end. Are you one of them?

Every time we've talked about Inbox, our readers have come out of the woodwork to profess their love for its time-saving features, and disappointment at its death. We're still waiting for some of its functionality to come to Gmail, as was once promised, and a large number of you have claimed to be intentionally ignoring the current warnings, aiming to use it until the very last minute. With half a year to make the transition, it seems surprising that so many of our readers are holding onto Inbox. 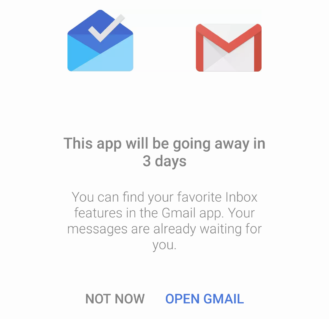 Although this poll will only be relevant for the next two days, the question has to be asked: Have you already made the switch, or are you enjoying your last few moments with Inbox? (And, although I usually hate the desperation that comes from asking for comments, feel free to chime in with your replacements, if you think you've found a good one.)