Today T-Mobile has announced plans to "un-carrier" the home broadband market, launching its own service that aims to provide speeds over 100Mbps to 90% of the US population. T-Mobile's wireless home ISP will eventually be powered by the company's upcoming 5G network, but in the meantime it's revealing a 4G pilot program to test the idea out.

According to John Legere — T-Mobile's exuberant and often hyperbolic CEO, who made the announcement earlier today — 28.9% of US households and 61.1% of "rural" households have access to one or fewer broadband providers. That's over a quarter of Americans that have at most one choice when it comes to home internet at basic speeds, and the picture is even more bleak (45%/76% of "rural") when looking at high-speed 100Mbps+ options.

Legere says these customers are "held hostage" when it comes to internet access. While that's certainly a dramatic way of putting it, given the contemporary requirements for internet access to be a functional member of society, he's not wrong. Customers in many markets have just two choices when it comes to broadband-speed home internet: A regional monopoly like Comcast, or to go without.

T-Mobile's CEO is confident that it can apply its usual level of disruption to the home internet market. "If there’s ever been an industry more in need of disruption than wireless, it’s the Cableopoly. So we are going to change it the same way we changed wireless!"

While T-Mobile's ultimate plans involve providing home internet service over 5G, for the time being it has decided to test things out with a 4G LTE pilot program. Markets included in this program have not been named yet, though the company's 4G-powered router will be provided to customers in the program for free, with later upgrades to 5G hardware.

The company ultimately plans to deliver speeds of over 100Mbps to 90% of the US population via 5G. T-Mobile's tech will be self-installed via a router and an app, no setup appointments (or associated fees) required. The company claims its service will be offered at an aggressively low price, with no annual service contracts or installation charges, but actual numbers are decidedly lacking at this point.

Given the timing and the explicit mention of certain parts of the plan happening after the expected merger, odds are this announcement is at least half posturing to ensure its merger with Sprint is approved by the US government. Still, if T-Mobile is genuinely able to provide more customers real options when it comes to home internet, at a minimum the added competition could help drive high prices in many captive markets down.

According to an announcement made today, T-Mobile is rolling out an LTE-based pilot program for its home internet plans. To start, only a few customers in specific, undisclosed markets will be invited to the program, which will deliver "around" 50Mbps with no data caps for $50 a month, with no modem or equipment rental fees.

T-Mobile hopes to reach 50,000 households by the end of the year — that's a pretty small number, but this is a pilot program. Ultimately, T-Mobile plans to implement its home broadband service over 5G.

While 50Mbps of unlimited data might not seem like much for those of us in big cities, where speeds over 300 are more the norm, for those in underserved areas, it certainly beats satellite internet and DSL.

Someone over in the T-Mobile subreddit managed to snag a position in the pilot program, posting details about both the hardware and the performance observed in the LTE-based pilot program for team magenta's home internet service. 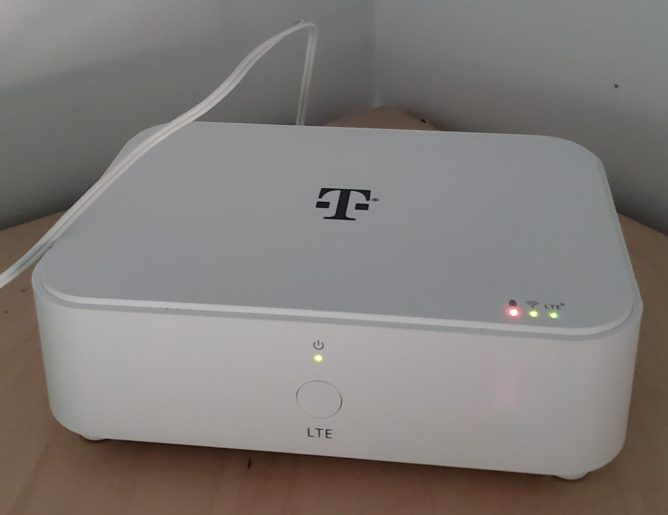 User /u/Modesecond provided images of the router/modem, which takes the form of a nondescript white box featuring an internal antenna (so placement will be important) with a handful of the expected ports around back. It sounds like it has all the expected router features built in, including NAT and port forwarding, plus the ability to send and receive SMS for some reason.

The setup process via T-Mobile's app was described as "super easy," and the results aren't bad: 83.4Mbps down, 22.9Mbps up, with a 25ms ping and 7ms jitter, all with full ipv6. That handily beats the earlier 50Mbps expectations for this limited LTE test.

Those of us in major cities using cable or fiber internet might not be too impressed by those numbers, but they're far beyond what many Americans can get in some suburban and rural markets. Modesecond was also able to stream unthrottled 1080p video in their tests, so there isn't any Binge-On-style downgrading happening.

The only caveats noted in the test of T-Mobile's home service were previously revealed: Although there are no data limits, the app states that service may be deprioritized.