Google may be working on a larger Hub, but not everything requires a big screen. If you don't care to make video calls, the seven-inch Google Home Hub can likely fulfill all your smart display needs. It's going for $130 just about everywhere lately, but right now, you can grab one in either chalk or charcoal for just $85 at Rakuten.

Ryan gave the Home Hub the AP Most Wanted seal of approval when he reviewed it in October, praising its compact form factor and quality screen. Seller CE Overstock's Rakuten storefront has the display for less than most other retailers at $99.99, and Rakuten members can take an additional $15 off with coupon code CE15 for a total of $84.99. Chalk and charcoal colors are available, but the more lively sand and aqua aren't. 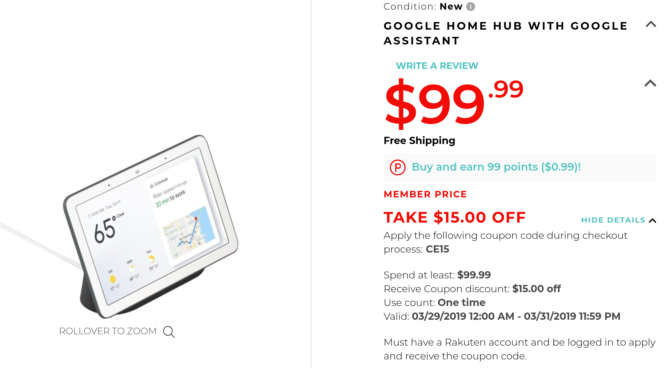 We saw a lower price in December, but it was only available for new Google Express customers. This deal is open to anyone with a Rakuten account — which are free and easy to sign up for. The discount expires at the end of the month, though, so if you're into it, get a move on.

16 new and notable Android apps from the last week including Energy Ring, Photo Map, and ...