We've seen the overflow... shortcuts... access points? Errm, whatever that thing pictured below is supposed to be called... It is slowly becoming more important to the Gboard team as a way to expand features without encroaching on the actual keyboard space. That may not be sustainable forever, but we should all be getting more and more comfortable with it if we want to get the most out of this keyboard. 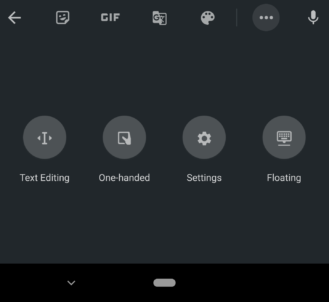 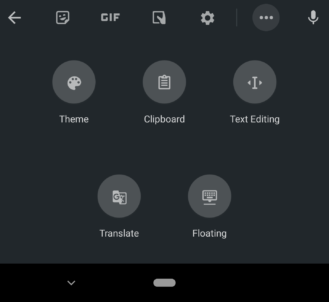 The latest update prepares Gboard to accommodate quite a few more icons in the lineup. Up to five used to be possible, but they were smashed a bit too tightly into a single row. Now, the list is allowed to expand up to four items in a row, but if it grows any further, it begins wrapping to a new line.

This change comes just in time for a couple more items that are likely to appear soon: OCR and Sharing. An internal list containing features that appear in this screen was just updated to include these items.

Of course, we saw signs of OCR all the way back in v7.3, which also indicated it would be added to this overflow screen. In the strictest sense, that's not really new information, but it does give a little certainty that OCR is still in the works. Sharing only turned up in the previous update, but it's probably not going to be used very often since it will be mostly used to either advertise Gboard or help people enable additional languages on their phones.

Debug setting, for a moment 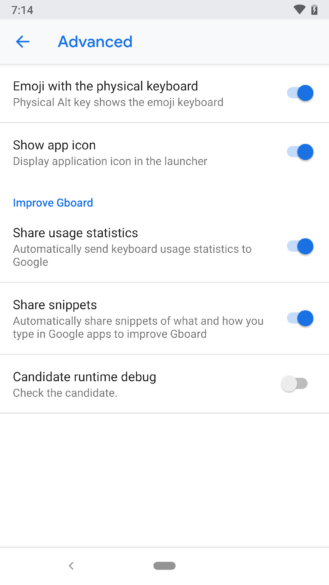 The latest version has added a setting called "Candidate runtime debug" to the Advanced settings screen. I think it's a safe bet this was an accident and will be corrected in a future update. There's also no outwardly visible sign that anything happens when toggled on, but you can go play with the toggle if you would like to feel like you're getting away with something you're not supposed to.

If you're using a Japanese keyboard in Gboard, it looks like you'll be getting an option to enable a "tri-state keyboard" that enables three keyboard modes: Digit, Hiragana, and Alphabet.

My familiarity with Japanese is limited to the names of the main written language sets and a few other oddball details, so I'm just going to invite our knowledgeable readers to hit the comments to help explain how (or whether) this is going to change the typing experience.

Having just mentioned the Sharing feature, it's a good time to point out that there's actually a whitelist for the apps that can be destinations for the message. Why there should be a whitelist for a feature that sends a promotional message, I can't imagine, but here we are. Here's the list:

The list contains most of the standard messaging apps and social networks, just as you would expect, but also includes a few unusual entries like dating and video chat apps, and even Snapchat.

We know Gboard supports skinning, and has made strides toward a proper dark theme, but what about a theme specific to Pixel devices? Judging by a new flag added to the app, this may be coming.

The name of the flag is the only notable clue here, so we'll probably have to wait a bit to see how it shakes out, but at least it's an interesting thing to speculate about. Just a shot in the dark, but with so much focus on colors, maybe Google is going to automatically theme Gboard to match the color of Pixel phones?

Close search box with a drag

A new flag was added that appears to allow a gesture to close the search box. It's currently disabled by default and doesn't appear to go live yet, so this is probably just a test for now.