The original Chromebook 14 from Acer came out in 2016 and was a decent device for the price (around $300) — as such, it was popular with critics and consumers alike. So we were naturally excited when we heard Acer was going to bring out a successor. I first got my hands on the Chromebook 514 in Berlin at IFA in the summer of 2018, but it was rather a disappointment. The build quality of the pre-production unit Acer had on display at the show left much to be desired, leading me to an initial opinion that it was too flimsy to even command a $350 price tag. Acer, understandably, was not pleased with this assessment but admitted the product needed improvement and vowed to deliver me a review unit at a later date with all of the kinks ironed out.

Some changes to the production line later, I now have a Chromebook 514 that more closely aligns with Acer's previous efforts. The model I’m reviewing (CB514-1HT-C3EG) is specific to The Netherlands but equivalent in specifications to this $429.99 US version (CB514-1HT-C07F). Unlike the cheapest variants that start at $349.99, mine has a multi-touch screen — useful for Android apps. There is also a more expensive SKU with double the RAM/storage and a more powerful Pentium processor for $499.99. 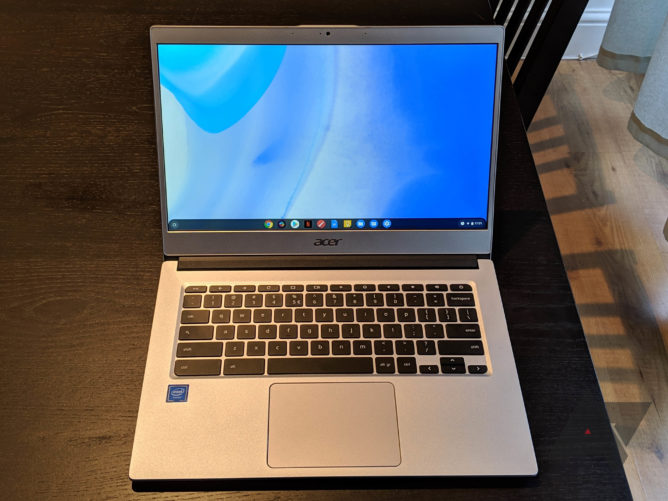 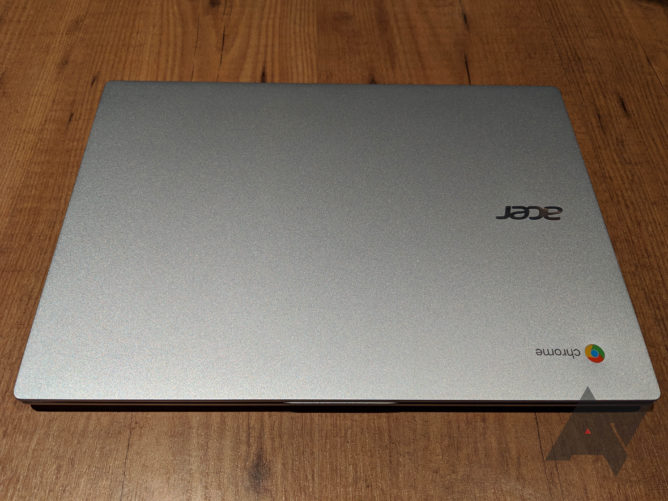 A key selling point of the Chromebook 514 is that premium materials are used in its construction. Unlike most cheap Chromebooks it boasts a (mostly) aluminum casing and glass trackpad. This would be impressive were it not for the fact that the bezel portion around the screen is made from plastic. To be fair, even higher-end laptops have plastic bezels, so perhaps it’s the decision to go with a silver plastic that tries to imitate the metal that is so jarring. The screen itself is plenty bright for indoor use and it's sharp enough (1080p) for me  — there are no real issues with the panel. The utility of a touchscreen is highly questionable on a non-convertible laptop like this. The hinge allows for the display to fall flat, in line with the keyboard, but not more. I rarely remembered that the screen could even be touched, if I’m honest.

When I played with a pre-production model at IFA in Berlin last year, I was pretty shocked by how badly it was made. The plastic bezel could easily be pulled away from the metal casing simply by pulling the screen down to close it, and there was so much flex in the hinge area and keyboard that it felt like it was made of cardboard. I’m happy to report that Acer has been true to its word and corrected most of these errors. The construction feels much sturdier, the flex is mostly gone, and it no longer feels like it’s going to fall apart. It’s good to see that Acer took these concerns seriously and addressed them accordingly. 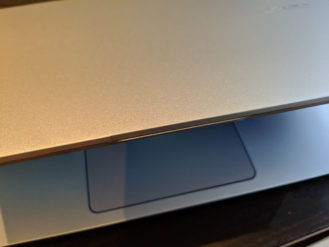 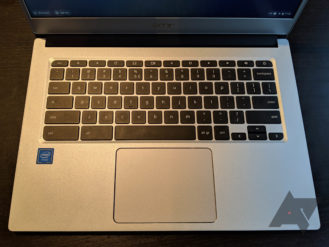 The backlit keyboard is a little bit too mushy for my liking, but it’s not too bad by Chromebook standards. I would still say I prefer the keyboard on my cheaper Toshiba Chromebook 2 from a few years ago as there’s a little less travel and a bit more response, but there are plenty of worse keyboards out there on Chromebooks. The trackpad is probably among the best I’ve tried on a device in this price range. It’s made from glass, the click is satisfying, and it doesn’t feel too cramped. When you use a Macbook Pro as your daily driver, most other trackpads feel much too small, but I was able to get used to this one. 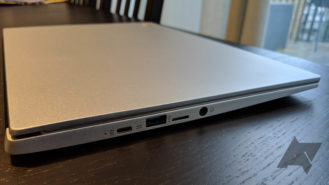 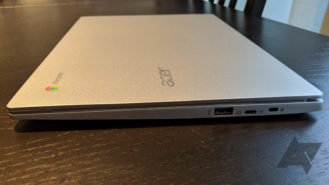 The rest of the hardware is mostly fine, if unremarkable. The whole package is surprisingly light, so it retains good portability even with its 14-inch screen size. It is good to have USB-C ports on either side that can be used for charging, though, and the microSD card reader could also come in handy. One important issue arises when you watch videos or listen to music — the speakers are absolutely terrible. Bottom-firing speakers rarely work well, but they’re particularly odious here, especially when you have the machine on your lap and the sound is further muffled. It’s a real shame since the screen is fine for watching content, but you can always plug into the headphone jack or use Bluetooth, I suppose. 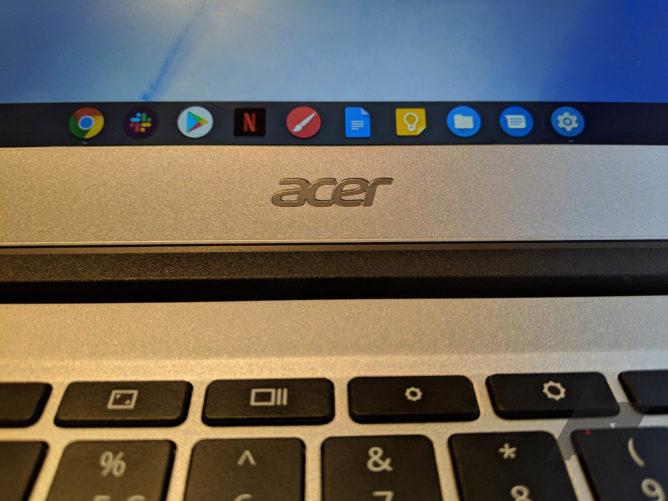 Chrome OS is a relatively lightweight platform, so 4GB of RAM and a Celeron N3450 chip can go a long way. The Acer Chromebook 514 is no exception, performing admirably in the face of all I could throw at it. If you use Chrome OS the way it’s intended — web browsing, checking emails, consuming video content — you’ll have no problem with this laptop. It’s plenty fast enough and it can handle plenty of tabs before you start to notice any adverse effects. There is a more expensive Pentium variant with 8GB of RAM, but it’s probably not necessary. Since Android apps are supported, you could download some pretty intensive games that would no doubt cause problems, but the casual Android games that I like to dabble with (Alto’s Odyssey is my fav) run okay here. 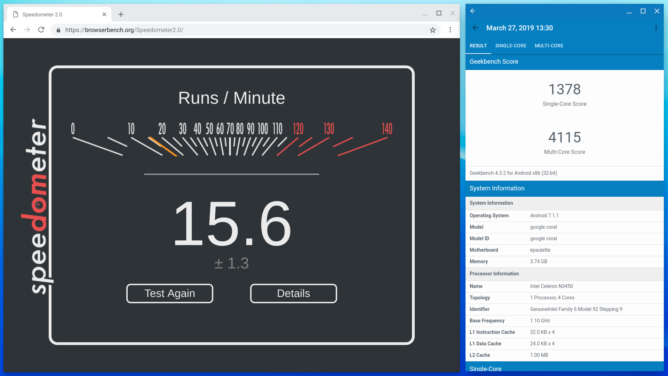 Don't expect powerful performance if you get a Celeron N3450 model, but it's fine for general web-browsing tasks.

I’m not going to go into Chrome OS and its limitations — we all know by now what we can expect from it and what we can’t. It’s fairer to compare this model to other Chromebooks, and in that respect, it works as you’d expect for the specifications. I've been getting battery life of around 9-10 hours, which is pretty solid. Acer promises 12 hours, but even so, it’s good enough for all-day use and that's as much as you can really ask from this type of device. 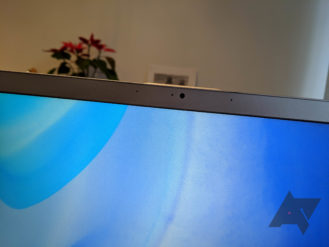 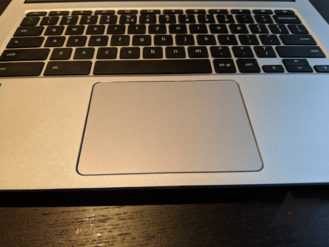 Probably not. Overall, the Acer Chromebook 514 is perfectly fine. It performs well enough for the things you’re likely to do on a Chromebook, it’s fairly well constructed (after some earlier concerns), and it’s not a bad looking machine. Its main problem is that there are other options for less that perform just as well, while for a bit more money you can get a much better experience — it’s just hard to see where the value lies. Acer’s own Chromebook 15 from 2017 is probably a better deal, particularly if you can get a good discount on the $400 MSRP. If you do decide that the 514 is for you, I would recommend getting the $379 model that has essentially the same specs as the one I’ve been using, minus the touchscreen display. 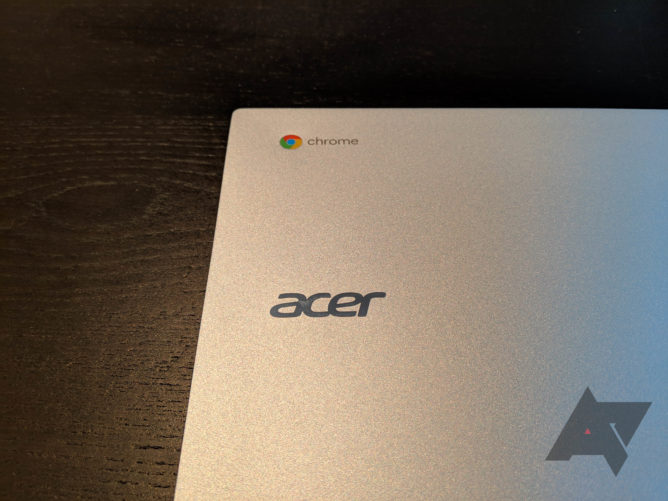 [Update: Officially out now] This War of Mine: Stories brings the Father's Promise DLC to Android