Speakers are no longer just ways to listen to music; they're often home to helpful AI personalities like Alexa and Google Assistant. Smart speakers are big business these days, and market analysis firm Canalys has a new report that shows just how big. According to Canalys, Google, Xiaomi, and Alibaba all saw massive worth in smart speakers in 2018 vs. 2017. Amazon, however, saw a more modest rise. 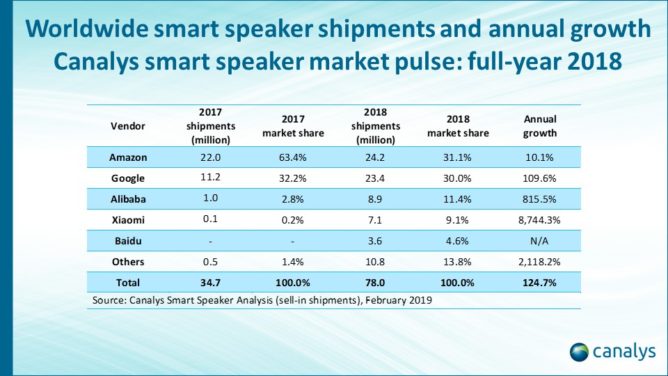 Google didn't have the largest year-over-year growth because it was already moving a lot of speakers in 2017. It grew 109.6% from 11.2m to 23.4m shipments. That gives Google a 30% share of the smart speaker market. In 2017, Amazon was far in the lead with 22 million smart speaker shipments. However, it only saw a 10.1% increase in 2018. That puts it just slightly ahead of Google with 24.2 million shipments for a 31.1% market share. Canalys notes that Amazon's Echo refresh in 2018 saved it from being overtaken by Google, but 2019 might paint a different picture.