Chrome 73 was released earlier this month, and following the usual two-week delay, the Chrome operating system has been updated to match. Chrome OS 73 isn't as substantial as the previous Chrome OS update, but there are still a few nice additions.

Since Chromebooks have been built from the ground up as always-online machines, basic offline features from other operating systems weren't high up on the list of priorities. Chrome OS 73 finally adds the ability to mark folders in Google Drive for offline access, as we previously covered. 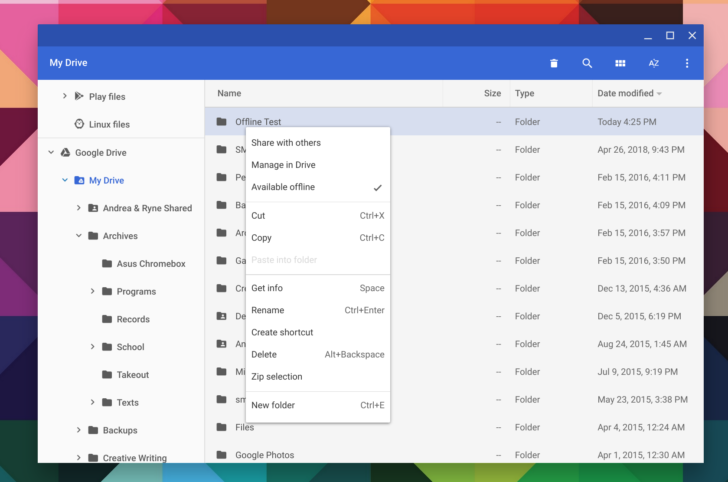 Folders marked for offline access will sync to your Chromebook's local storage, just like the Drive desktop client on Windows and Mac. To try it out, right-click any Drive folder in the File Manager and select 'Available offline.'

Android applications on Chrome OS will always be janky, but now they'll be slightly less so. On Chromebooks running Android 9.0 Pie (most are still on Nougat), starting media playback in an Android app will pause anything playing in Chrome, and vice-versa.

I'm not able to test this, since my Dell Chromebook 14 still has Android Nougat, but it's nice that Google is adding small quality-of-life improvements to Android apps with every Chrome OS release.

Chrome OS 73 also includes everything from the recent Chrome 73 update, such as the ability to control web audio/video playback with keyboard media keys (for sites that support it), badges on installed Progressive Web Apps, and various security features. Here's the full changelog:

The update has already been pushed to several Chromebook models already, but if you don't have it yet, give it another few days.