While Google is not known for its consistency, it still manages to add a healthy flow of elements to its search-integrated sport scores. The latest round of new features was introduced right before the football soccer World Cup 2018, including much more detailed information during live games and the official unveiling of floating scores or "pinned matches." Now, the latter is improved: as spotted by Scott Oldfield on Twitter, you can have multiple floating info cards cluttering your screen.

As you can see in the screenshot above, the feature is straightforward. You can move the pills around freely and independently, and even stack them on top of each other should you run out of space (wallpaper pun kinda intended). The general workflow hasn't changed: You just pin scores you normally would, and they will all show up on your screen.

I'm not sure how long this has been live already — it honestly never crossed my mind to try and pin more than one game. But when Google introduced the feature, it didn't mention that you could see more than one match this way, and, during the World Cup, there was only a limited amount of matches taking place simultaneously, so it wasn't necessarily a high-demand feature then.

However, if you could pin multiple games all along, please go ahead and call me out in the comments. I'm fairly confident it's new, but even if it's not, the discoverability goes against zero, so we'd like to hereby inform you of this feature's existence — you're welcome.

Another interesting change that started rolling out over the last couple of weeks is the addition of live scores to a league's table. It gives you a better visualization of small changes in a team's relative position when numerous matches take place at the same time: 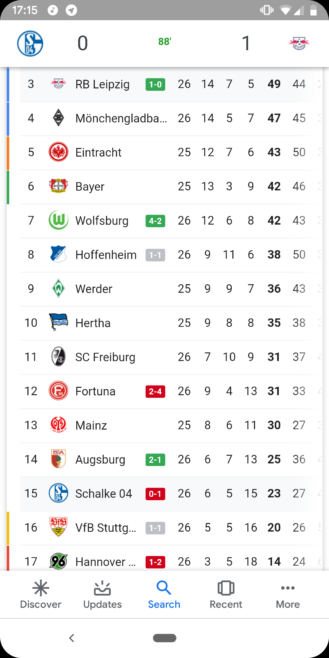 When I checked the NBA for that feature, I was greeted by a short message that live scores within standings were available there now, so this appears to be a global rollout for many kinds of sports.

Nuki Smart Lock 2.0 is the best solution for European-style locks

YouTube video titles are bolder, smaller, and fit more words on your screen