Back in October, Facebook finally granted WhatsApp users on Android the ability to swipe on a message to reply to it. Although this let us enjoy something iOS users had for a while, the company's Messenger platform still didn't allow users to quote a particular message to reply to it. However, the social media giant is working on making its messaging services more consistent with each other. Indeed, after allowing you to unsend messages, it's now bringing the swipe-to-quote feature to Messenger as well. 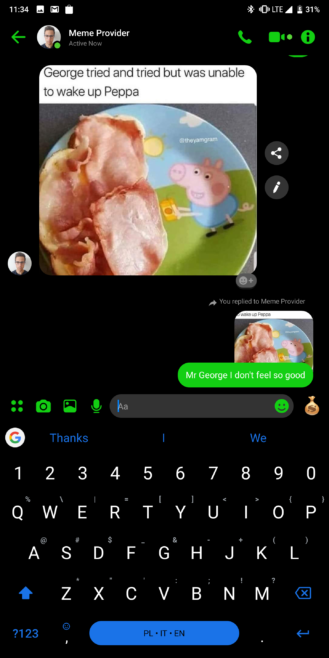 Thanks to this new feature, you'll now be able to swipe a message to the right to quote it, just like you would in WhatsApp. Messenger also adds an indication on top of your reply to show you've responded to a specific message.

It appears this is a server-side activated feature, as we haven't been able to reproduce it, even using the latest beta release. It's unclear how long Facebook will test it for before deploying it more largely, but at least Android fans aren't neglected this time.

On a less important note, the company updated the Messenger app recently to let you watch a friend's story directly from a chat thread. Although there's no option to deactivate this functionality, it's discreet enough to remain acceptable.

Chrome gets swipe gestures to navigate back or forward