Just this morning, we wrote about Google and the European Commission getting along, with Google proactively encouraging users to use other browsers and search engines than their own. Now, they're back at war. The Commission has fined Google €1.49 billion for breaching EU antitrust rules concerning AdSense.

The gist of the problem are Google's embedded search engines in newspaper or blog websites. Within those, Google provides adverts along search results. That makes AdSense for Search an "online search advertising intermediation platform," as the Commission calls it. Google holds a marketshare of above 70% in that area within the European Economic Area (EEA) and coupled with its search market share of 90%, this makes it the biggest player in Europe.

The EU's problem with AdSense is that it's not possible for competitors in online search advertising, e.g., Microsoft or Yahoo, to sell advertising space right within Google's own search results pages on google.com — which makes custom search engines on news and blog websites a vital entry point for Google's competitors.

Google took a number of steps to prevent exactly that: Starting in 2006, the US company prohibited website publishers from placing any search adverts from competitors on their search result pages — leaving Google's ads as the only viable option to continue using its search engine. In March 2009, Google also prevented competitors from placing their search adverts in the most visible parts of websites' search results through contractual "Premium Placement" clauses with website publishers. Starting the same month, Google also began requiring publishers to seek written approval before making changes to how rival adverts were displayed on search results.

The European Commission created a graphic that brings its point across very clearly: 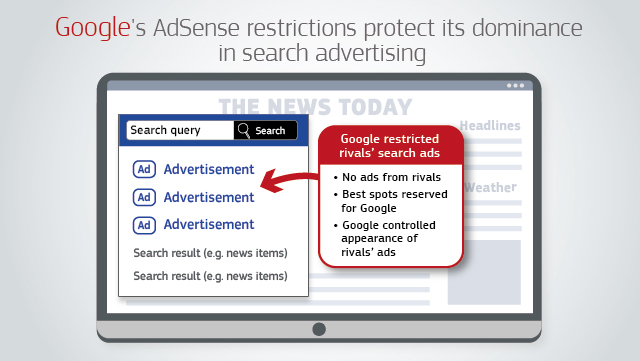 Google has already ceased above practices in 2016 after the Commission objected to them in July 2016 — thus, the US company already complies with today's decision. The fine of €1,494,459,000, a mere 1.29% of Google's turnover in 2018, is calculated based on its revenue from AdSense in the EEA during the time it violated the EU's antitrust rules.

Overall, the case at hand is complicated. Google did prevent website publishers from using other advertisers on their search pages, but on the other hand, the company provides its custom search engines to publishers free of charge, making its advertisements the only revenue it earns.

This is also not the first time Google gets into regulatory troubles in Europe. It received a $2.7 billion fine for Google Shopping and is awaiting another even higher fine of $5 billion for Android. There are some signs of rapproachment on both sides though: Google's Kent Walker reassures that the EU and Google always agreed "that healthy, thriving markets are in everyone’s interest," and the EU's antitrust chief Margrethe Vestager said she sees "positive developments both in the shopping and Android case” in a press conference attended by Reuters right after announcing the latest fine.

The European Commission has fined Google €1.49 billion for breaching EU antitrust rules. Google has abused its market dominance by imposing a number of restrictive clauses in contracts with third-party websites which prevented Google's rivals from placing their search adverts on these websites.

Commissioner Margrethe Vestager, in charge of competition policy, said: "Today the Commission has fined Google €1.49 billion for illegal misuse of its dominant position in the market for the brokering of online search adverts. Google has cemented its dominance in online search adverts and shielded itself from competitive pressure by imposing anti-competitive contractual restrictions on third-party websites. This is illegal under EU antitrust rules. The misconduct lasted over 10 years and denied other companies the possibility to compete on the merits and to innovate - and consumers the benefits of competition.”

Websites such as newspaper websites, blogs or travel sites aggregators often have a search function embedded. When a user searches using this search function, the website delivers both search results and search adverts, which appear alongside the search result.

Google was by far the strongest player in online search advertising intermediation in the European Economic Area (EEA), with a market share above 70% from 2006 to 2016. In 2016 Google also held market shares generally above 90% in the national markets for general search and above 75% in most of the national markets for online search advertising, where it is present with its flagship product, the Google search engine, which provides search results to consumers.

Google's provision of online search advertising intermediation services to the most commercially important publishers took place via agreements that were individually negotiated. The Commission has reviewed hundreds of such agreements in the course of its investigation and found that:

Therefore, Google first imposed an exclusive supply obligation, which prevented competitors from placing any search adverts on the commercially most significant websites. Then, Google introduced what it called its “relaxed exclusivity” strategy aimed at reserving for its own search adverts the most valuable positions and at controlling competing adverts' performance.

Google's practices covered over half the market by turnover throughout most of the period. Google's rivals were not able to compete on the merits, either because there was an outright prohibition for them to appear on publisher websites or because Google reserved for itself by far the most valuable commercial space on those websites, while at the same time controlling how rival search adverts could appear.

Google's practices amount to an abuse of Google's dominant position in the online search advertising intermediation market by preventing competition on the merits.

Market dominance is, as such, not illegal under EU antitrust rules. However, dominant companies have a special responsibility not to abuse their powerful market position by restricting competition, either in the market where they are dominant or in separate markets.

Today's decision concludes that Google is dominant in the market for online search advertising intermediation in the EEA since at least 2006. This is based in particular on Google's very high market shares, exceeding 85% for most of the period. The market is also characterised by high barriers to entry. These include very significant initial and ongoing investments required to develop and maintain general search technology, a search advertising platform, and a sufficiently large portfolio of both publishers and advertisers.

Google has abused this market dominance by preventing rivals from competing in the online search advertising intermediation market.

Based on a broad range of evidence, the Commission found that Google's conduct harmed competition and consumers, and stifled innovation. Google's rivals were unable to grow and offer alternative online search advertising intermediation services to those of Google. As a result, owners of websites had limited options for monetizing space on these websites and were forced to rely almost solely on Google.

Google did not demonstrate that the clauses created any efficiencies capable of justifying its practices.

Consequences of the Decision

The Commission's fine of €1 494 459 000 (1.29% of Google's turnover in 2018) takes account of the duration and gravity of the infringement. In accordance with the Commission's 2006 Guidelines on fines (see press release and MEMO), the fine has been calculated on the basis of the value of Google's revenue from online search advertising intermediation in the EEA.

Google ceased the illegal practices a few months after the Commission issued in July 2016a Statement of Objections concerning this case. The decision requires Google to, at a minimum, stop its illegal conduct, to the extent it has not already done so, and to refrain from any measure that has the same or equivalent object or effect.

Finally, Google is also liable to face civil actions for damages that can be brought before the courts of the Member States by any person or business affected by its anti-competitive behaviour. The new EU Antitrust Damages Directive makes it easier for victims of anti-competitive practices to obtain damages.

In June 2017, the Commission fined Google €2.42 billion for abusing its dominance as a search engine by giving an illegal advantage to Google's own comparison shopping service.

In July 2018, the Commission fined Google €4.34 billion for illegal practices regarding Android mobile devices to strengthen the dominance of Google's search engine.

The Commission's investigation into the conduct covered by the present decision began as part of the broader Google Search investigation (case 39740).

On 14 July 2016, the Commission sent a Statement of Objections to Google setting out its preliminary views that the company had abused its dominant position by artificially restricting the possibility of third party websites to display search advertisements from Google's competitors.

Article 102 of the Treaty on the Functioning of the European Union (TFEU) and Article 54 of the EEA Agreement prohibit the abuse of a dominant position.

Fines imposed on companies found in breach of EU antitrust rules are paid into the general EU budget. This money is not earmarked for particular expenses, but Member States' contributions to the EU budget for the following year are reduced accordingly. The fines therefore help to finance the EU and reduce the burden for taxpayers.

More information on today's decision is available on the Commission's competition website in the public case register under the case number 40411.

Save $30 on UE's Megaboom 3 and Boom 3 Bluetooth speakers