Do Not Disturb mode on Android has a long and troubled history. Since its inception on Android 5.0 Lollipop, Google substantially changed the behavior of the feature with every other update of its OS, taking away many options on Pie. Between that version and Q, apart from some improvements to the menu item structure in DND settings, the UX basically stays the same, with an improvement some of you power users might love: Schedules are now customizable.

If you head into an individual "schedule" (Q) or "Automatic rule" (Pie), Android Q greets you with a new option at the bottom of the screen: Do Not Disturb behavior. Here, you can create custom settings for the chosen schedule. You can select which calls, text messages, and sounds come through, and you can even granularly restrict visual interruptions — do you want to hide all of them or do you still want to see notification dots and pop-up notifications? 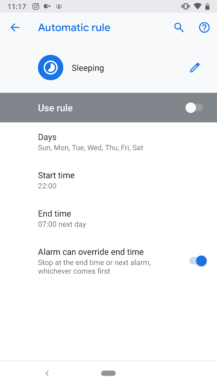 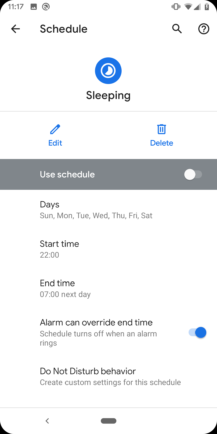 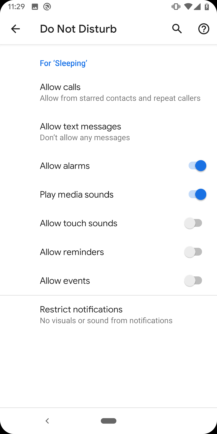 While it's possible to set up those granular actions for all of DND on Pie, what's really new in Q is that you can individually choose different behaviors for different schedules. So, if you'd like to block all sounds including media while sleeping, but you don't want to block calls while at work, you can do that now and still use DND for both occasions.

I'm not sure whether that's a feature many people will end up using. Do Not Disturb settings seem to become more branched with each Android version, and most users are going to stick with the default options. But it's nice to see that Google doesn't forget power users who like to tweak their DND modes exactly to their liking.