Google is embracing languages lately. Not only is the Assistant bilingual in dozens of language combinations now, but support for more dialects and variants is spreading through several of the company's apps and services. And that's the case with Discover (aka Google Feed). Bilingual support was mentioned when Discover launched, but only for English and Spanish in the US — although it was already working for English and Hindi in India. Based on tips and evidence we've seen over the past weeks, that support has expanded and is reaching more language combinations.

We've had users in Germany, France, and Russia tell us that they're seeing articles in English plus either German, French, or Russian, respectively. The news is interspersed among their feed and the only differentiator is a new option to stop showing stories in that language. So you can disable it once it starts happening, but there doesn't seem to be any way to enable it if you still don't have it. There's also no sign of the granular control Google promised where you'd be able to pick to receive certain topics in certain languages. That's probably coming later. 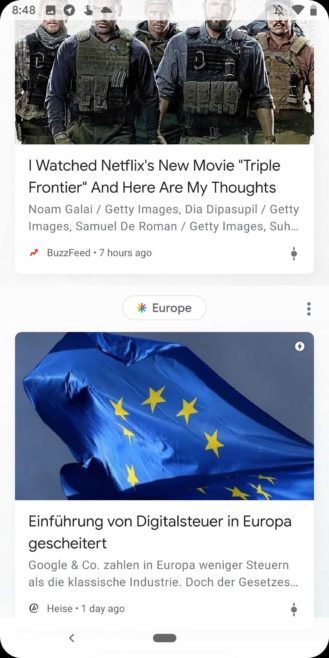 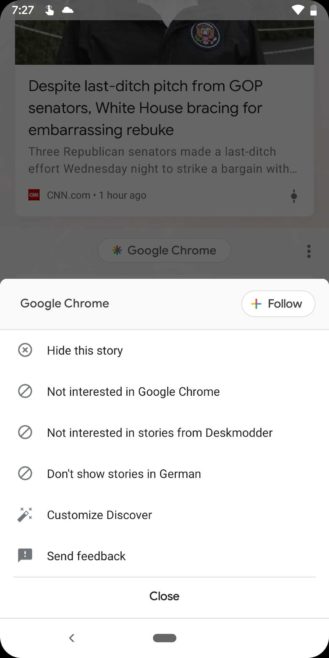 Google Discover is bilingual in Germany (top) and France (bottom).

We're not sure what triggers the bilingual choices: IP address, your phone's settings, or your Google Assistant language settings are the likely culprits. I have my phone and Google set to English US, but I've added French as my second language in Assistant and still get Discover articles in English only. It could be that I need to be in France to see these, or that the feature's server-side rollout hasn't reached me yet.

The Galaxy S10 can't tell when it's in your pocket, keeps waking the screen