Two new accessibility options have appeared in Android Q. The new "time to read" and "time to take action," settings allow you to configure just how long certain messages stay on the screen. Or at least, they probably would if any apps supported them right now. 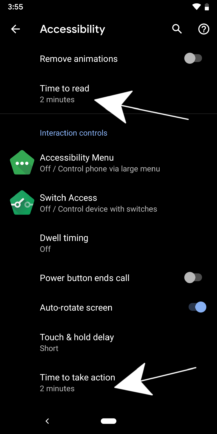 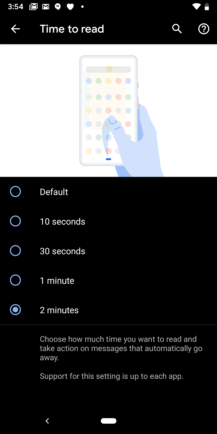 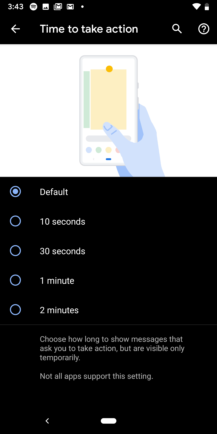 So far as we can tell, both options are entirely new in Android Q, though they claim to do slightly different things: both offer to increase the duration for which certain items appear on the screen, but one applies to normal messages, while the other applies to messages which include actions. I assume in both cases this means toast-style messages, but in my own testing the settings don't seem to do anything right now, so I can't be sure. (Ben Schoon at 9to5Google tells me this may vary based on whether you reset your device during the upgrade to Q, as it works for him.) To be fair, Google notes that support for these options is up to individual apps, and it's possible the built-in apps on Android Q haven't been modified to take advantage of it yet.

Each of the settings has 10-second, 30-second, one-minute, and two-minute options. Both also have little animations like those in other panes within settings, but they seem to be generic animations that don't actually apply to the setting, as they just show the Android P/Q gesture system in operation. Presumably, the animation in each is a placeholder for future, contextually correct animations.

The feature randomly started working on my phone today, nearly 24 hours after I set it. YMMV, it seems to be a bit inconsistent.